At first glance, 16-year-old Amos Yee seems timid, naïve, almost oblivious to what he did: Challenge the very foundations of Singapore and its revered founder.

But within five minutes, Yee deliberately and clearly articulates why he believes his blog posts are worth jail time.

“I feel like I’m the one who’s actually supposed to break that boundary so that other people will be able to talk about things in an honest way and discuss about it, which I feel is really important,” says Yee, during an exclusive interview with CNN, while seated in his family’s flat in Singapore.

In July, Yee was released from prison after 53 days, after being convicted on charges of obscenity and “wounding of religious feelings.” 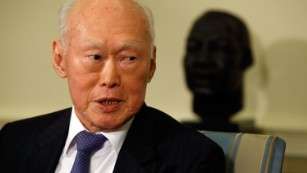 The charges stem from a video rant posted by this precocious teenager who was rallying against his country’s lack of free speech and its beloved former leader. In it, he speaks directly into a camera, expressing his outrage.

“Because everyone is scared, everyone is afraid that if they say something like that they may get into trouble and give Lee Kuan Yew credit that was primarily the impact of his legacy,” states Yee in this somewhat tame excerpt from his blog post in March.

The video rant ridicules Singapore’s founding father, Lee Kuan Yew who died in March, calling him a dictator, and comparing him to Jesus Christ. The video post also contains what Yee himself describes as vulgar content aimed at insulting Singapore’s leaders.

“I think I had a sense that I would get into some kind of trouble but obviously I thought it was worth it because I think that the quality or content was enough to be able for me to take that risk,” says Yee.

Yee spent weeks in detention and claims he was strapped to a bed for long periods of time, distraught and fearful. He adds that he was put through psychological evaluations that he considered demeaning.

None of that, however, seems to have changed his behavior. We find Yee right back at it, posting videos from his bedroom.

It’s a bedroom that has all the trappings of a rebellious teenager; one that might be familiar to many parents around the world. He spends hours in his room on the computer, scripting, shooting and editing.

But this is Singapore and the consequences for an opinionated teenager speaking his mind can include incarceration. Singapore tries to monitor and curb online content and, according to the World Press Freedom Index ranks, just 153 out of 180 countries.

CNN contacted officials within the Singapore government about Yee’s case but did not receive a response.

Even some allies of the government are wondering if the leadership is dealing with this young man too harshly, thereby giving his video manifestos more publicity in the process.

“It’s perfectly normal for young people to write critical articles. And I think we should treat Amos Yee as a normal 16-year-old person. And let’s see what happens when he grows up,” says Kishore Mahbubani, Dean at the Lee Kuan Yew School of Public Policy in Singapore.

For now, Yee remains free and continues to produce content that is blunt, political and defiant. He says Singapore and its leadership are ready for more freedom of expression.

As for the reason he continues to risk his own freedom, Yee explains plaintively that he likes provoking.

“One is just to make jokes, I mean because you can see my content is of really high comedic value, I think just making jokes and entertaining, there’s an appeal in that,” he says, adding, “I’ve experienced many things and I’ve learned quite a lot so yeah, it’s been quite a ride actually.”