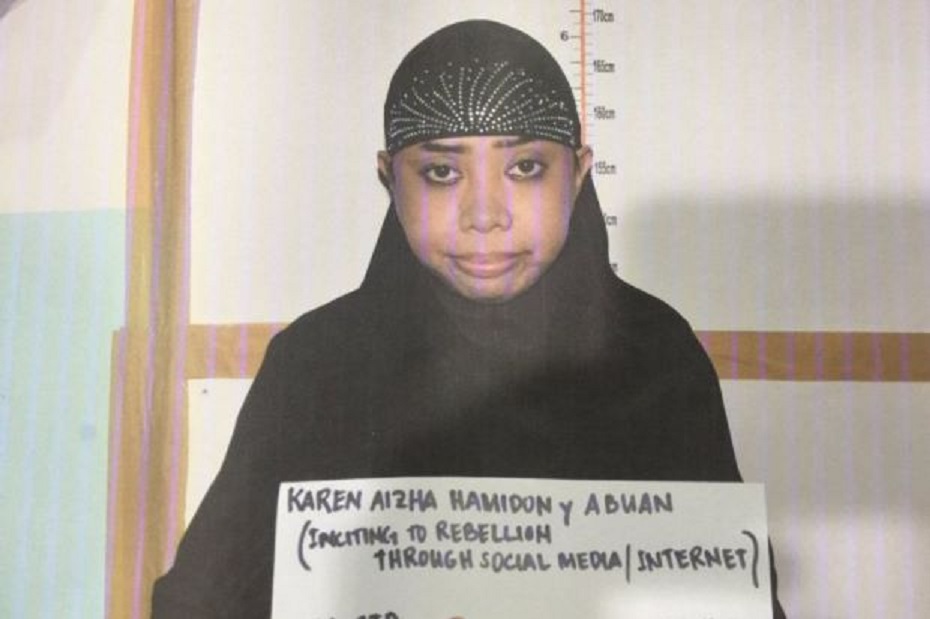 MANILA: Philippine security forces have arrested a 36-year-old Filipino woman suspected of recruiting, via social media, fighters from around the world for the ultra-radical Islamic State (IS). Karen Aizha Hamidon was arrested in Taguig city, an hour east of the capital Manila, on Oct 11, Justice Secretary Vitaliano Aguirre announced at a news conference on Wednesday. Aguirre said Haidon was formerly the wife of Singaporean Muhammad Shamin Mohamed Sidek, a security guard detained in Singapore in August 2015 for planning to join IS and using social media to incite violence.

Hamidon later married Mohammad Jaafar Maguid, a Filipino, who led ISIS-linked Ansar al-Khilafah Philippines till he was killed by police in January this year, according to Mr Aguirre. Aguirre said Hamidon was also a close associate of Musa Cerantonio, an Australian Islamist preacher who was purportedly recruiting fighters for IS. Rebellion charges are being readied against Hamidon in relation to 296 social media posts linked to her seeking to recruit reinforcements for besieged Muslim militants in the war-torn southern city of Marawi.

“It is very clear that her actions are in conspiracy, or in sync, with actions of the rebels. While her companions are fighting in Marawi, her part is to further recruit fighters to assist in the Marawi siege by the IS and Maute groups,” said Aguirre. Hundreds of Muslim militants stormed Marawi on May 23 in an audacious bid to turn it into an IS “province”. They have held on to parts of the city for nearly five months. News of Hamidon’s arrest comes two days after security forces in Marawi battled and killed Isnilon Hapilon, designated by IS as its top man in South-east Asia; and Omarkhayam Maute, co-leader of a group that provided the bulk of fighters that attacked Marawi.

On Tuesday (Oct 17), President Rodrigo Duterte declared that Marawi had been “liberated from terrorists’ influence” following the deaths of Hapilon and Maute, though the army has yet to dislodge a pocket of militants entrenched in the heart of the city. More than 1,000 militants, government troops and civilians have been killed and about 400,000 people displaced. Half of Marawi lies in ruins, levelled by air raids, artillery barrages and fierce urban fighting. Indian intelligence officials last year sought help from Philippine authorities, after Hamidon’s name cropped up as administrator of Facebook, Telegram and WhatsApp groups that sought to recruit Muslims in India to fight for IS in Iraq and Syria.

Mohammad Sirajuddin, 33, a marketing manager with the Indian Oil Corporation arrested in December 2015, said it was Hamidon who first contacted him on Facebook and WhatsApp and convinced him to join IS in Syria. A profile provided by India’s National Investigation Agency said Hamidon’s father was a Muslim. He died when she was 20 years old. Her mother was a Christian, and brought her up as a Christian. But she and her two sisters converted to Islam about 10 years ago.