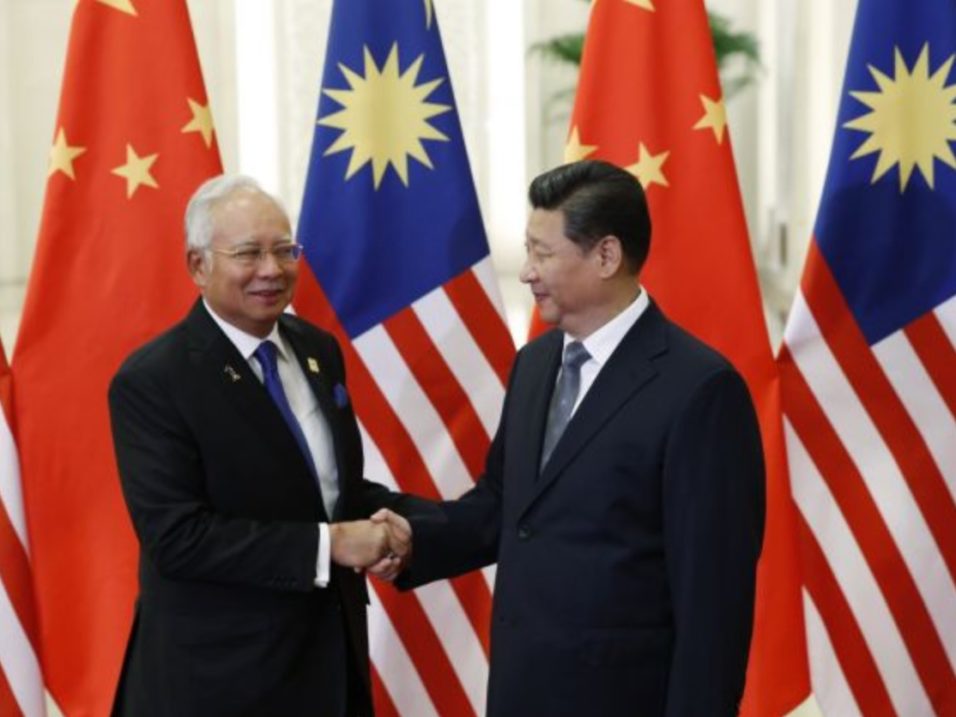 The Straits of Malacca have been a gateway for China for centuries in its quest for power.

A story blended from Malaysian history and folklore says an emperor sent a princess called Hang Li Poto marry the Sultan of Malacca in the Ming Dynasty, offering a ship filled with gold needles. He also sent a blunt message. “For every gold needle, there is a subject. If you can count the number of needles, you will learn the true extent of my power”, the emperor reportedly said in a letter.

Hundreds of years later, China is again seeking influence in Malaysia as it spreads its economic and military clout through South-east Asia. It is investing billions in a US$7.2 billion (S$9.8 billion) redevelopment that will see Malacca, long the haunt of Chinese traders, become a new deep sea port.

It is also providing funds for infrastructure projects down the eastern seaboard of Malaysia, key heartland areas for Prime Minister Najib Razak ahead of an election that could be held this year. New roads and bridges may help him woo ethnic Malays, but the money could come at a long-term cost.

“The closeness with China is an Achilles heel for Najib,” said Dr Mustafa Izzuddin, a fellow at the ISEAS-Yusof Ishak Institute in Singapore. “While investment coming in will balloon government coffers and boost the economy, the opposition is using the China card to criticise the government for becoming too close to China and accusing it of selling Malaysia’s sovereignty.”

China’s investment in Malaysia has risen since Mr Xi Jinping took power in 2012, with the president describing ties with Mr Najib as the “best ever”. Beijing is readying a state visit by Mr Xi to Malaysia in the coming months, according to three people with knowledge of the plans who asked not to be identified given the sensitivity of the discussions.

China has committed to import goods worth US$2 trillion from Malaysia over the next five years (a nearly eight-fold jump from 2016 imports over that period), invest up to US$150 billion in the country and offer 10,000 places for training in China.

Mr Najib brought home US$33.6 billion in deals when he visited China in November — the biggest haul yet between the countries — plus an agreement to buy four patrol boats from China.

Malaysia, like Singapore, has strong historical links to China. About a quarter of its population is ethnically Chinese, and traders for centuries stopped at ports in Malacca and Penang to sell silk, tea and porcelain while buying cinnamon and nutmeg. There is even a fusion cuisine based on Chinese and Malay ingredients, called Peranakan or Nyonya.

“We are going to be drawn into the economic gravity of China,” said Mr Steven CM Wong, deputy chief executive of the Institute of Strategic and International Studies Malaysia, at a conference on Mr Xi’s Belt-and-Road trade project in Kuala Lumpur last month. “Just as if you are in North America, you are drawn into the economic gravity of the United States,” he said. “This is not what we want or we don’t want. It’s just the way things are.”

Still, the money risks being caught up in domestic politics. Mr Najib’s critics, including former premier-turned-opposition leader Mahathir Mohamad, say the country will need to cede influence to China in exchange for its money, and that local businesses will lose out.

“Much of the most valuable land will now be owned and occupied by foreigners,” Dr Mahathir wrote on his blog in January. “In effect they will become foreign land.”

Mr Najib, in an article published in May in the South China Morning Post before a visit to China, said that he made “no apologies for wanting to build world-class infrastructure for Malaysia that will, with local ownership being preserved, open up huge swathes of our country”. His office did not respond to requests for comment.

Some analysts said Najib risks being painted as too close to China. While the countries both claim parts of the disputed South China Sea, for example, Malaysia has been mostly quiet on China’s military build up in the region.

“There are perceptions that Najib is being bought by the Chinese,” said Professor Bridget Welsh, a political scientist at John Cabot University in Rome and author of The End of UMNO? Essays on Malaysia’s Dominant Party.

“Within Malaysia, China’s interventions have the potential to bring about greater ethnic tensions and political instability, as well as affect Malaysia’s relationships with its neighbours,” she said.

The Malacca Strait already has sufficient port facilities, according to opposition Selangor state legislator Teng Chang Khim. “Why can’t you make use of the present ports?” Mr Teng said at the Belt-and-Road conference.

Deputy Secretary General for Trade Isham Ishak said the government would seek to balance its relationship with China.

“We want to make sure that there’s fair value in terms of investments from China into Malaysia,” he said at the same conference. “It’s not only about Chinese products coming in, Chinese money coming in, and Chinese foreign workers coming in.”

Investment in infrastructure is good for Malaysia whether it comes from China or the US, according to Mr Xu Bu, China’s ambassador to the Association of South-east Asian Nations.

Mr Harrison Cheng, a senior analyst with Control Risks in Singapore, said there were signs of unease in some quarters of Mr Najib’s United Malays National Organisation about Chinese investments.

Still, UMNO’s core voters are more interested in bread-and-butter issues, he said. “There has yet to be any strong signs of a serious backlash within UMNO and the public.”