1 Dead, 4 Taken To Hospital After Car Flips Over In Fatal Accident At Woodlands Avenue 12

Rilek1Corner > Singapuraku > 1 Dead, 4 Taken To Hospital After Car Flips Over In Fatal Accident At Woodlands Avenue 12 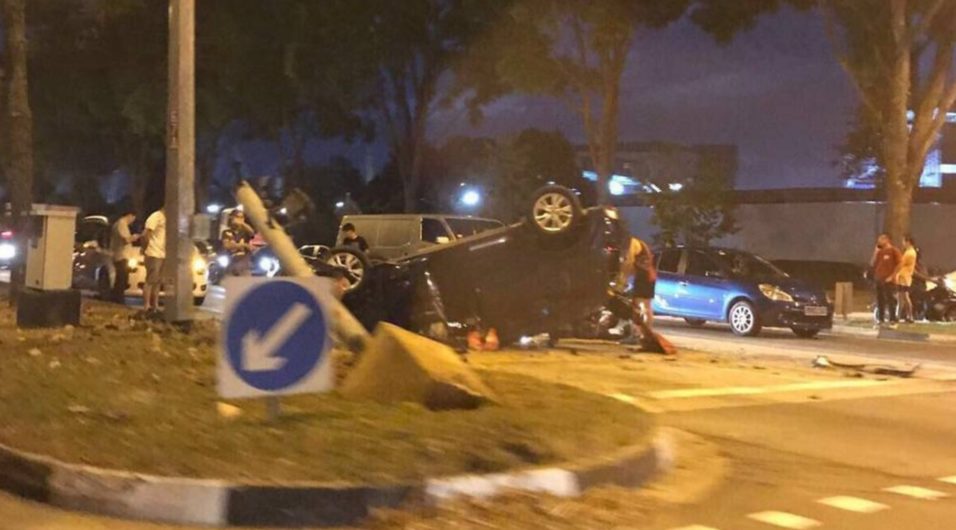 A motorcyclist was killed and four other people, including a one-year-old infant, were taken to hospital after a car flipped over onto the opposite lane at Woodlands Avenue 12 on Monday evening (Aug 7).

Channel NewsAsia understands the driver of the car was trying to avoid another vehicle when his car hit a traffic light and overturned.

A 30-year-old male motorcyclist was pronounced dead by paramedics at the scene. The other motorcyclist, a Malaysian, and a married couple in the car were taken to Khoo Teck Puat Hospital. The driver of the car is in his early thirties.

Police said that the couple’s one-year-old child who was in the car as well, was taken to KK Women’s and Children’s Hospital.

Dashcam footage circulating on social media showed a dark-coloured car flipping over a road divider onto the lane opposite. One motorcyclist appears to be knocked into the path of the lorry and the other motorcyclist rams into the overturned car and falls over.

Members of the public were seen rushing forth to help. One man pulled the infant from the overturned car, and another passenger appeared to crawl out of the car.

Other pictures on social media showed debris and what looked like vehicle parts scattered across the junction, as well as what appeared to be a dislodged pedestrian crossing light.

Facebook user Wilson Lee shared video of the aftermath of the accident. He said that there was “massive congestion” when he took the video at around 10pm.