2 real reasons why there are few Muslims in Singapore’s SAF; “it does not discriminate against the Muslims..”

Rilek1Corner > Singapuraku > 2 real reasons why there are few Muslims in Singapore’s SAF; “it does not discriminate against the Muslims..” 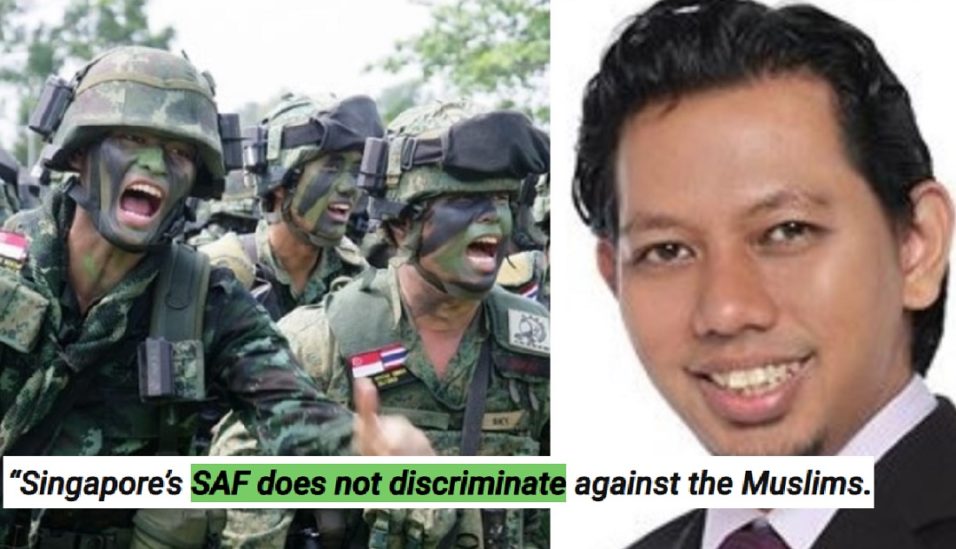 Today, Singapore has a few Malay commandos and importantly, at least one fighter pilot according to an infamous Muslim convert Terence. He shared: “Will we have Malay commandos? We already do. Malay fighter pilots? We have one, and I still remember that there was a huge discussion behind the scenes about whether we could trust him. Common sense prevailed.”

According to the ill-repute man among the Muslim community here in Singapore, there are but 2 real reasons why there are little to none Muslims officers in the SAF.

”One of the reasons we do not have more Malay pilots is simply because they fail the selection test – particularly the mathematics test.”

He added that today, the SAF puts “Malays in many sensitive positions, from SIGINT to MINDEF itself. As long as you are qualified and determined enough, the SAF will take you, regardless of race or religion.”

As far as the Navy is concerned, Terence said that Muslims are not present on naval vessels “due to logistics, not religious discrimination. RSN’s policy is to not have vegetarians, Hindus who do not eat beef, or people who have any sort of food allergies.”

He added: “Our naval assets are meant to be ready for extended deployment. We do not have the luxury of stopping in the middle of a war to look for halal food.”

Here is what he had to say in full.

“Singapore’s SAF does not discriminate against the Muslims. We have a lot of Muslims in sensitive positions. I am, myself, a Muslim convert, and I have never felt that I lacked opportunities because of my religion. The issue is Malays, for historical reasons. The real reason why there were no Malays in much of the SAF is not found in our history books. It is no longer classified, but it is a forgotten episode, just like much of the events during the period of our Separation from Malaysia and the Konfrontasi. For those interested, there are people around who lived during that period, and were there when it happened, although all of them are very old.

“When Singapore separated from Malaysia, the divorce was painful. In the election prior, when the PAP campaigned in Malaysia for a a “Malaysian Malaysia”, instead of a “Malay Malaysia”, UMNO were outraged and played the race and religion card.

“The main instigator was Syed Jaafar Albar, the so-called “Lion of UMNO”. He was a radical Malay supremacist, despite the fact that he was clearly Yemeni Arab, and not Malay. He was vehemently against Singapore’s separation from Malaysia, and resigned as secretary-general of UMNO in protest. He went as far as to advocate that Malaysia militarily occupy Singapore.

“At the time of Separation, almost half of the troops based here were from Malaysia. When the British gave control of the various units to Singapore, Malaysia and Brunei, they neglected to consider that the units were recruited from all over the Malay Peninsula. We had Singapore-born Malays and Malaysian-born Malays in the SAF and the Police, at SAFTI and elsewhere.

“The 4th Malaysian Infantry Brigade consisted of two infantry regiments of about 1,000 soldiers each. Just over half of them were Malaysian, and they had divided loyalties. They were commanded by Brigadier-General Syed Mohamed Alsagoff, a relative of Syed Albar, and another Yemeni Arab. To say that he did not get along with Lee Kuan Yew is to put it mildly. He claimed it was a joke when he told Lee Kuan Yew that he could have had the PAP leaders arrested and shot. Lee Kuan Yew and his family moved out of the Istana and borrowed the Gurkha Regiment to guard them.

“The Malaysian troops, all ethnic Malays, mutinied. Just over half of them supported Malaysia. One of the Singapore officers was killed. It was Col. Alkaff, BG Alsagoff’s cousin, who negotiated a withdrawal of the Malaysian troops. The 4th Malaysian Infantry Brigade withdrew from Singapore by November of 1967. The murderers of the Singapore officer were arrested. Two were hanged, and the others were only released from detention a decade or so ago.

“As a consequence, Lee Kuan Yew used the Land Acquisition Act to dismantle the Alsagoff family landholdings in Singapore. Conscription was instituted, but no Malays were conscripted at first. The commandos, once dominated by Malays, now have none. The Malay officers and NCOs, even though they did not mutiny, were either never promoted or were let go. This included the entire ethnic Malay cohort of officer cadets. And of course, Singapore invited a few countries to come and train our soldiers. Only Israel accepted. They stood by us when we had nothing, and we do not forget our friends.”

That being said, do you believe the reasons Terence gave? Is he even from SAF previously?