Indonesian Maid Abused My Grandma, Stole Her Money, Then Ran Away To Malaysia

Rilek1Corner > Singapuraku > Indonesian Maid Abused My Grandma, Stole Her Money, Then Ran Away To Malaysia 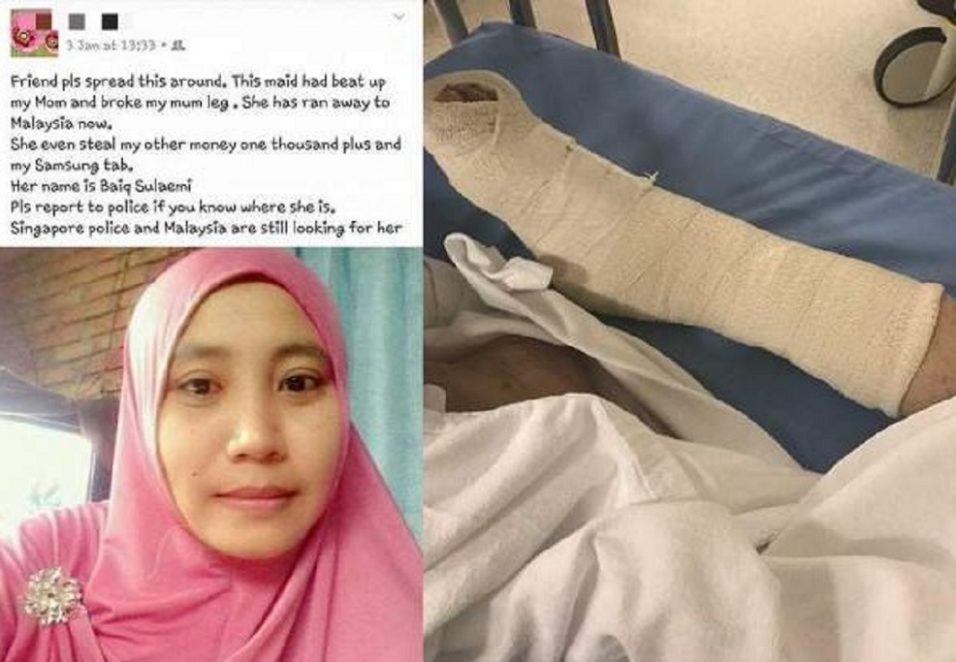 On Monday 2nd of January 2017 around 7.30am, my grandmom was pushed and beaten by her helper who have worked with her since July last year. Not only that, the helper twisted n broke my grandmom’s right ankle while grandmom tried to stop her from leaving th house. My grandmom is currently warded in the hospital due to th injuries and fractured leg. She suffers some bruises from the scuffle too.. All this happen while my aunt was out sending her daughter to school.

Before she left, she have also stolen my grandmom’s money approx $1.3k (supposingly to bank in that day) and rm300+. She also took my aunt’s Samsung Tab. The helper has left Singapore to Malaysia via Woodlands Custom on that very morning according to th Investigation Officer.

We have lodged a police report and got legal advice on this matter too. We are just waiting for the Investigation Officer to get back to us on the updates.. Since this is not a Murder or Drug case, Interpol will take sometime to handle this.

I would like to seek help from everyone here to make this post viral so the helper can be found in no time. For our family, we are totally fine if the helper wants to leave if she really want to but why does she need to beat up and broke my grandmom’s leg. It is just unfair for my grandmom who is already 86years old and less mobility..

We trusted and treated her just like our own family. My family members will give her extra allowance for her own expenses, additional of her salary. Bought for her lots of things and she got lots of rest thru out her working here. She will also took her nap too as and when my grandmom naps. So we are shocked when this happens.

We have no idea what triggers her too.. Coz if she wants to fled, she can do it th past mths while she was alone with my grandmom. We believe that she was influenced or taught by someone that crossed path her recently. But no one cares about it now. All we care now is to seek justice for my aged grandmom who is still in a trauma state.

Her details are as per below –

Do PM or Whatsapp me if you have any info about it. Thank You All For Your Help..
Jazakallahu Khayran

IN SINGAPORE IF EMPLOYER WERE TO ABUSE AND CAUSE HURT TO A DOMESTIC WORKER, TH EMPLOYER WILL BE CHARGED SO WHY CANT THIS HEARTLESS MAID BE CHARGED FOR HER WRONGDOINGS. ESPECIALLY TO AN ELDERLY WOMAN.