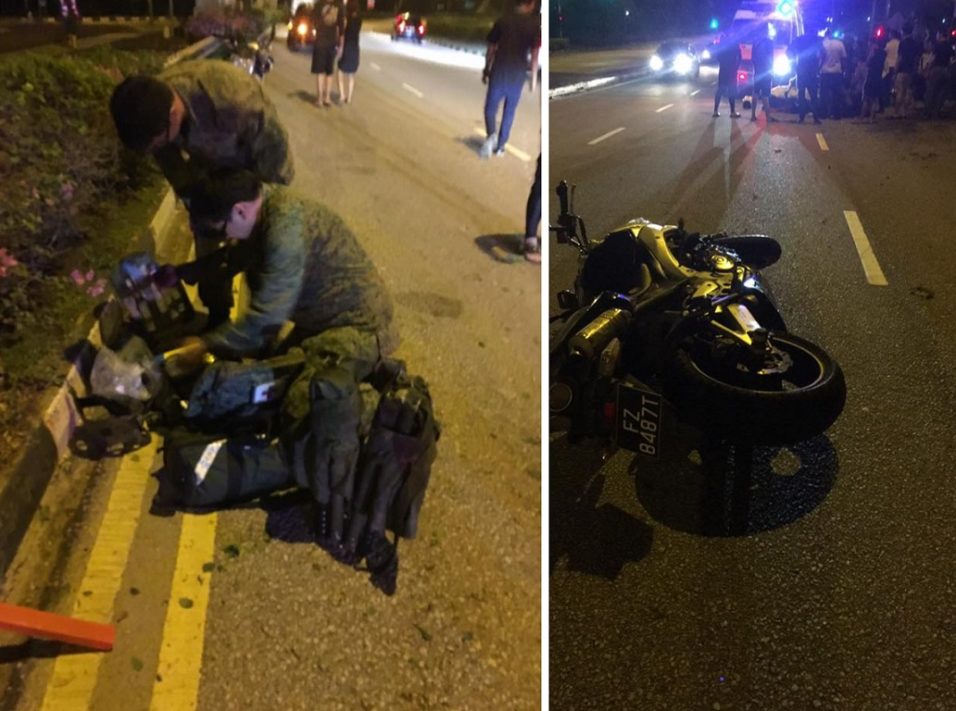 I was about to make a turn from Mandai Road towards SLE/KJE, when I saw this happened. The time was at that moment , 11:20PM

I came abit too late but only managed to direct traffic as the others was busy trying to keep the seriously injured rider to stay conscious.

Amongst the many I saw around helping by are two “Abang” motorcyclists and the man of the match that caught my eye are these two Soldiers rending their aid effortlessly trying to keep the seriously injured motorcyclist stay conscious as well. They were quick to act as a paramedic before the Singapore Civil Defence Force arrived at scene to take over.

These two soldiers tried their very best and means to keep the injured rider safe with the best of their knowledge and have came out away from their line of duty to render assistance.

These two soldiers are the heroes not only to protect during time of war crisis (if prevail) but even at such unforseen incidents they stopped their military vehicle, and provide aid in terms of frontline medical needs to the victim.

I’m very honored to see such acts when nobody even notice of thier presence because was too shocked to witness the victim lying down somehow motionless.

Kudos and my sincere salute to this Men in Green for being good Samaritans as they had just completed their exercise and heading back towards Khatib Camp.

These two NSF soldiers are

Please spread this message to the Singapore Armed Forces. They deserved to be commended and recognised !