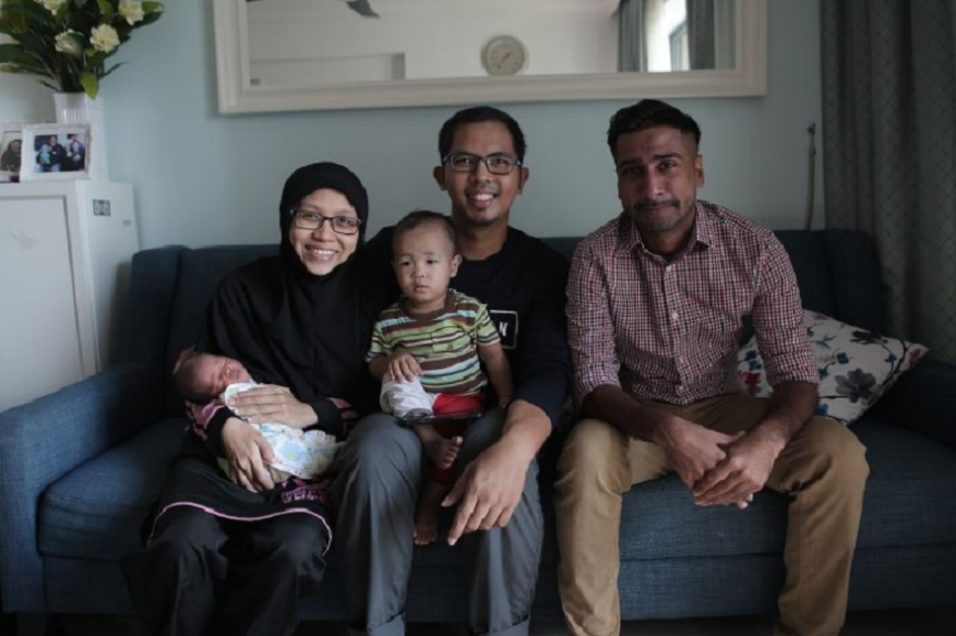 Almost two weeks after a woman gave birth to a baby boy in the backseat of his car during a Grab ride to the National University Hospital (NUH), Alvinder Singh reunited with the newborn and his parents. The 28-year-old operations manager on Friday (25 Aug) visited airport emergency officer Musaddiq Khamis, 27, and his wife Liyana, 28, at the Upper Serangoon home where little Ahmad Luqmaan has been staying since his discharge from hospital.

Singh had picked up Musaddiq and Liyana on 12 Aug through a Grabcar booking, which came with the message “pregnant wife in labour”. The couple did not call an ambulance as they thought they would have enough time to get to the hospital. Singh, who has only been driving with Grab for two months, said that he started hearing the cries of a child during the journey to NUH. “I looked back and he’s (Musaddiq) is smiling with the biggest smile in the world. Proud father,” he recounted.

For Musaddiq and Liyana, having a baby outside the hospital may not have been planned, but antenatal classes the couple had taken prior to the birth of their son helped prepare them for the possibility. Musaddiq’s experience of being prepared to deal with emergencies also played a part. “He knew how to comfort me when I was having labour pains. It’s important for a husband to keep calm so his energy can ‘spill’ onto me,” Liyana said with a laugh.

Offering some advice to fathers-to-be, Musaddiq said the birth of a child is not just a “one-way” street. “The husband also has a part to play. Words of affirmation…reaffirms that ‘we can do this’. It’s not a one-man show, or a one-lady show. That’s something we managed to perform in an emergency,” Musaddiq said. “I can vouch for that,” Singh chipped in. “He did amazing.”

While the couple said they would probably wait until their son had at least reached Primary One before telling him the story of his birth, Singh said he hoped to visit the family again when the infant is slightly older and can have more interactions with him. “He’s also a soccer coach… can consider,” Musaddiq said of Singh. Singh visited Musaddiq and Liyana together with Grab Singapore country head Lim Kell Jay and Andrew Chan, head of Grabcar Singapore. The two Grab officials presented Musaddiq and Liyana with a Grab voucher worth $8,000, and fuel vouchers worth $800 to Singh.