Damanhuri Abas: It’s Not About Anti-Halimah, It Is About The Election Process

Rilek1Corner > Singapuraku > Damanhuri Abas: It’s Not About Anti-Halimah, It Is About The Election Process 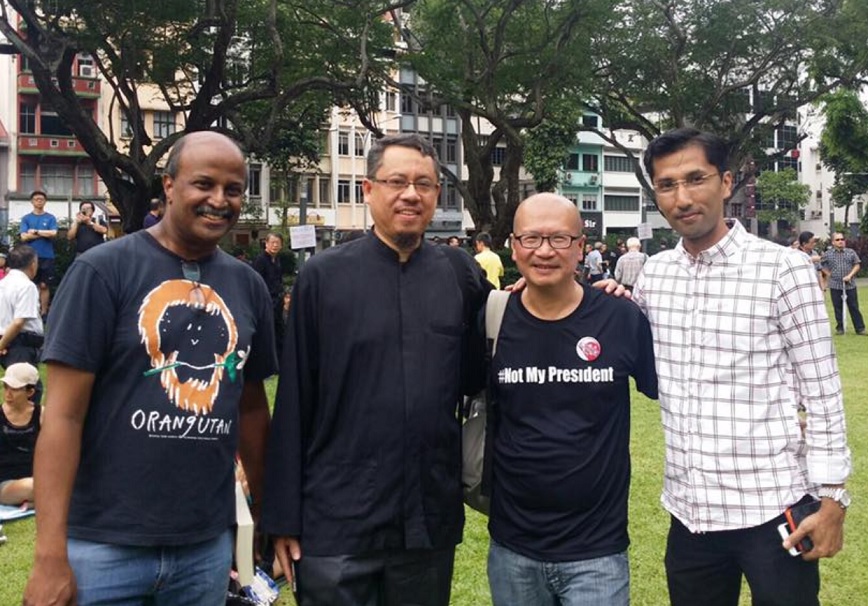 The attempt to label this protest as anti-Halimah/Malay is misplaced. It was never about the person, it was about witnessing how the election process was systematically undermined, shortchanging citizen’s right to vote the best independent person for the vital role of Guardian of our National reserves as well as ensuring that meritocratic credentials are safeguarded in high public offices from potential conflict of interest situations.

While at HL, i met young concerned and disillusioned Singaporeans who asked important questions about race, race relations, racism, politics, reform, etc. Our exchanges sitting on the grass of HL revealed some interesting insights.

1. What and who is the Malay race?

Our race should never be what a committee decides. It is our ethnic identity inherited by birth and through organic cultural assimilation. No one should ever force an identity or race on anyone. After 52 years, society has evolved into a melting pot, creating a unique embracing Singaporean identity. This natural mix reflects social reality and is worthy of our celebration. However, when we politicise race, it gets messy very fast. This was clearly the case for this reserved PE when candidate’s race clearly do not fit the rigid pretentious race boxes and in the end was forced in anyway. It surely will be bruising. But its no fault of any candidate nor us, citizens. The blame lies squarely on those who imposed those rigid simplistic boxes on us to divide but then strangely claims it can unify.

2. After 52 years, why is it that the Malay community needed this costly tokenism at the expense of our public money?

Firstly, the community was never asked about it nor we wanted it. It was never our priority. The help that the Malay community needs is for the Government to stop boxing us in their box. If we had a box mentality to begin with, this country would never be multi-racial. The race boxes were legacies of Colonial past that the Government chooses to re-use instead of abandoning.

3. What do the Malay community want?

Fair chance to full unhindered access to equal opportunities in this country like every one else who are Singaporeans. Race based policies should stop immediately. Unjustified subliminal branding of Malays as inherently disloyal through unspoken security policies during National service must end. It is unjust and unfair that we as indigenous Malays are given a lower security clearance level by Mindef for no apparent reason explained for the last 52 years while new citizens from Mainland China, Myanmar, India, etc., etc., are given full or higher security clearance level than us. What have the Malays collectively done to inherit this blanket poisonous label?

4. Why are there not many Malays at this protest event?

The Malay leadership both in Government and in community have been systematically co-opted to be beholden and compliant. The outcome of which majority of the Malay community have seen and known only the PAP political leaders or friendly to PAP ones, throughout most of their lifetime. Any non-compliance to the status-quo is met with harsh consequences, ostracised and sidelined. Overtime, 52 years later, Malays are sceptical or suspicious of any non-Government related initiatives, they rather stay away and quietly support from a distance. For the Professionals, most are salaried employees and many are civil servants. So we see why the ‘endorsement’ of Mdm Halimah was fast and furious from the ‘community’. Sadly, the Malays by now are so used to singing from the same song-sheet, that they now do so, even without being asked. The rest, you can line the dots yourself.

5. How can Singapore achieve political reform?

The Government’s control on all aspects of life is dominant and almost total. This was achieved by design and numerous tweaking done overtime to guarantee that the political system and power structure remains unchallenged. Just think election process (GRC, gerrymandering, raising qualifying bars, short election campaign, changes to the constitutions and the parliamentary act), meritocracy vs elitism (SAP schools, nepotism and cronyism), ethnic quotas for HDB (low minority numbers used to justify GRC), the People’s Association (pro PAP), no media freedom, etc. We have a big daunting hazardous political mountain before us to climb. Every Singaporean must realise that for the opposition, public space is severely restricted, social media provides best outreach but its impact are small and limited. NGOs must participate in political related activism. Lawyers must raise their political game and no more remain a passive bystander. Finally, we need a unifying figure for this great reform effort, i.e. Dr Tan Cheng Bock or his equivalent.

Personally, it was an afternoon well spent for the sake of our collective future. May this effort be blessed by God.