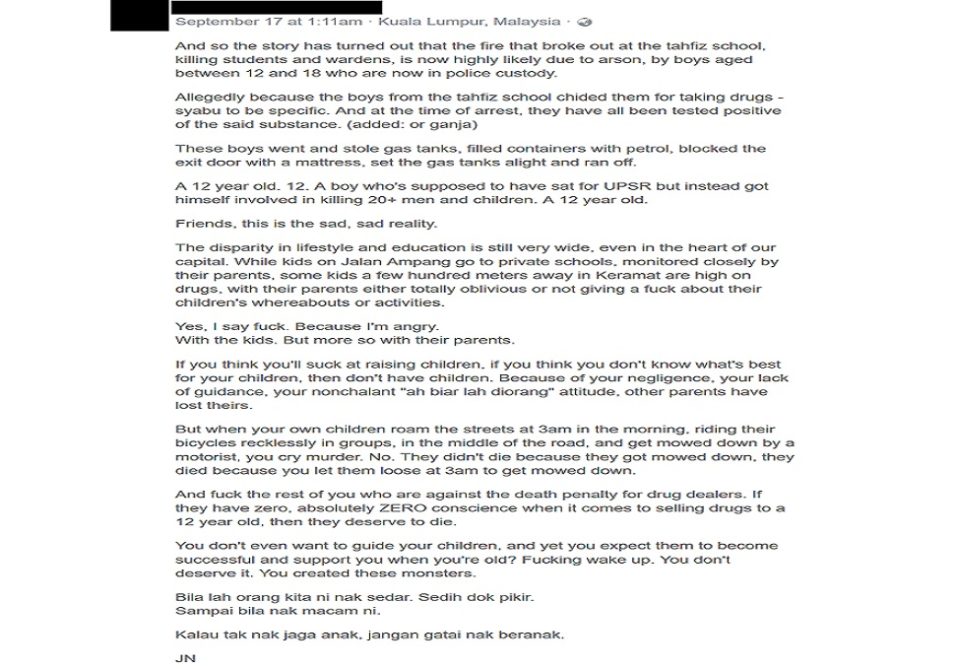 And so the story has turned out that the fire that broke out at the tahfiz school, killing students and wardens, is now highly likely due to arson, by boys aged between 12 and 18 who are now in police custody. Allegedly because the boys from the tahfiz school chided them for taking drugs – syabu to be specific. And at the time of arrest, they have all been tested positive of the said substance. (added: or ganja) These boys went and stole gas tanks, filled containers with petrol, blocked the exit door with a mattress, set the gas tanks alight and ran off.

A 12 year old. 12. A boy who’s supposed to have sat for UPSR but instead got himself involved in killing 20+ men and children. A 12 year old. Friends, this is the sad, sad reality. The disparity in lifestyle and education is still very wide, even in the heart of our capital. While kids on Jalan Ampang go to private schools, monitored closely by their parents, some kids a few hundred meters away in Keramat are high on drugs, with their parents either totally oblivious or not giving a fuck about their children’s whereabouts or activities. Yes, I say fuck. Because I’m angry. With the kids. But more so with their parents.

If you think you’ll suck at raising children, if you think you don’t know what’s best for your children, then don’t have children. Because of your negligence, your lack of guidance, your nonchalant “ah biar lah diorang” attitude, other parents have lost theirs. But when your own children roam the streets at 3am in the morning, riding their bicycles recklessly in groups, in the middle of the road, and get mowed down by a motorist, you cry murder. No. They didn’t die because they got mowed down, they died because you let them loose at 3am to get mowed down.

And fuck the rest of you who are against the death penalty for drug dealers. If they have zero, absolutely ZERO conscience when it comes to selling drugs to a 12 year old, then they deserve to die. You don’t even want to guide your children, and yet you expect them to become successful and support you when you’re old? Fucking wake up. You don’t deserve it. You created these monsters. Bila lah orang kita ni nak sedar. Sedih dok pikir. Sampai bila nak macam ni. Kalau tak nak jaga anak, jangan gatai nak beranak.