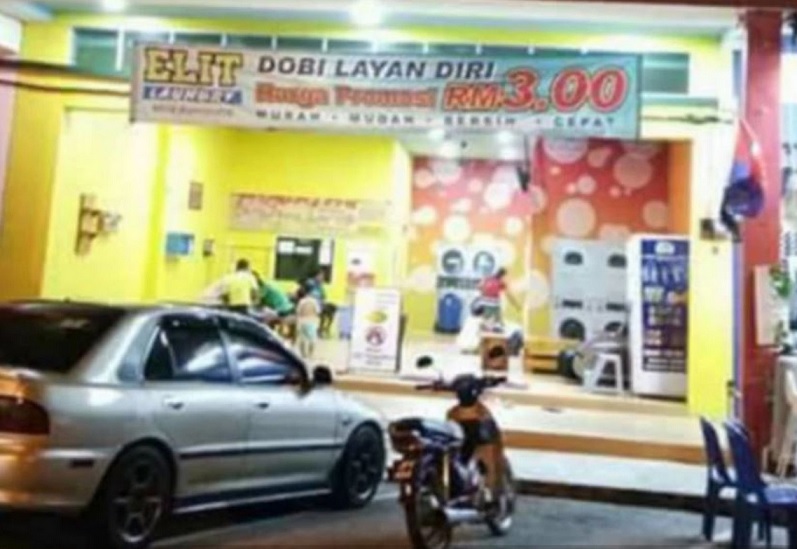 A self-service laundromat in Jalan Junid, Muar, which caters only to Muslim patrons, has sparked controversy on social media.

Photographs of the shop’s signboard with the words – “For Muslim customers only. Muslim-friendly. Leave your shoes outside” – placed at the laundromat entrance have gone viral on Facebook.

Netizens were divided in their opinion. Some praised the move, saying that it was done for the benefit of Muslim customers concerned given possible mixture of ‘najis’ (impurities) in the wash loads, while others criticised it as being unfair.

Facebook user Zachary Arshad said he was disappointed at what the laundromat is doing as it could divide the community.

“I’m Muslim, and this is completely overrated and unacceptable. Islam does not teach this. Islam is for all, Islam is to unite the people, not divide. This will only cause further divide among the people,” said Zachary.

Others however felt that the owner’s actions were justified.

Above: A photograph of the shop’s signboard with the words – “For Muslim customers only. Muslim-friendly. Leave your shoes outside” – placed at the laundromat entrance have gone viral on Facebook. Photo: New Straits Times

“Well, if the owner is a Muslim and wants to run it in a Muslim way , I don’t think there is anything wrong with it . That is his right.”

“Why are there a lot of negative comments here? (He) hasn’t mentioned anything racist,” said Suresh on the ‘Persatuan Gaya Hidup Sihat Pelabuhan Klang’ Facebook page.

“A majority of his customers may have complained about being uncomfortable in sharing the usage (of the equipment) with non-Muslims.

“This is not about being racist or about any religion…this is business,” said Indra Aditya.

The religious authorities, meanwhile, believe that the owner is acting within his rights.

Johor Islamic Religious Affairs Committee chairman Abd Mutalip Abd Rahim said there was nothing wrong for the owner of the laundromat in imposing such a restriction as it was his right as a business owner.

“Non-Muslims should not worry because there have options to patronise other laundromats elsewhere.

“As Muslims who live in a multi-racial society, we cannot be too rigid in upholding such matters, but at the same time, should not belittle this effort taken by the operator of the laundromat either,” Mutalip told the New Straits Times.

He said the state government has no plans to impose any such regulations statewide, and he urged people to better understand the concerns of Muslims in such issues.

Johor Mufti Tahrir Samsudin said he welcomed the initiative taken by the business owner because some Muslims were doubtful in using self-service laundromats.

“If someone wants to do it, then it is a good thing because some Muslims hold doubts over laundromat services.

“It is better for Muslims to be free of such doubts when it comes to cleanliness as it will help Muslims fulfil religious obligations,” said Tahrir.

Asked about the concept of laundromat services in Islam, Tahrir said that such a service should make sure that clothes are cleaned from minor and severe impurities.