“Visit a mosque, ask a Muslim.” 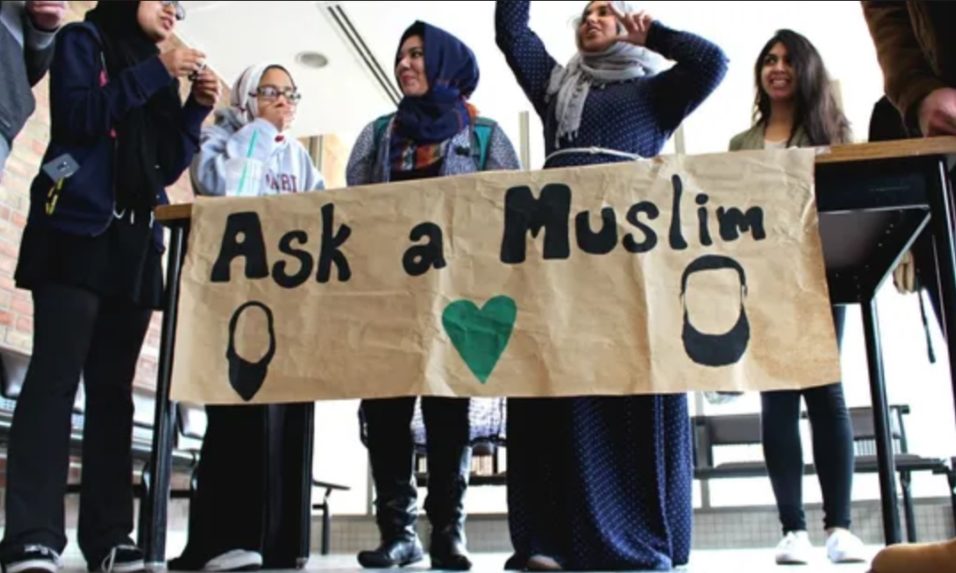 The hate for Islam and Muslims who are portrayed as blood thirsty, intolerant and extreme. However, the media fails to portray that that is the ideology of a small fraction of a fragmented outcast who only claim they are Muslims, using misinterpreted, incomplete Qur’anic scriptures to their political advantage. The media fails to report that the majority of us, 1.6 billion of us, do not subscribe to those disgusting ideologies. The rest of us, were taught from young that our prophet taught us to be loving; to love another human being, as how we love ourselves. We were taught that our prophet declares anyone who creates harm towards their neighbour as disbelievers. We were taught to treat plants and animals with care and compassion. We were taught in Islam to pray for peace upon whomever we meet, which becomes our daily greetings. Long before the Geneva Convention and such, almost 1400 years prior, our prophet has taught us that even in a time of war, we cannot kill children, women and elderly, no tree should be harmed, no animals to be killed unless for food, no place of worship to be destroyed, we should not play dirty, to uphold treaties, to be fair to our opponents, to treat our prisoners of war with respect and dignity, what food we eat is what they should have, to not harm an opponent who has surrendered. Islam teaches us to live and let live, and religion cannot be imposed upon unwilling hearts because matters of the heart is between the person and God. Islam teaches us to do good and be fair to everyone, even the very people who hurt us.

Islam is the religion which restricts us to marry of 4 maximum, at a time when a man can have unlimited wives. This is to increase the responsibility of the men towards women and their children. Islam teaches that if a man cannot be responsible for one wife, he shall not marry more than one. Islam brought women to a higher level, teaching us that wives are to be shareholding partners in a matrimony instead of being the lesser being to the men. Islam raised the rights of women to have rights in property and inheritance, in a time where women had no rights to them. Islam encourages women to have education. Islam protects women against the sexual objectification of women. Islam asks women to cover up and men, too, to lower their gaze; women are precious beings in Islam, a mother is mentioned thrice as the priority when one of the companions of the prophet asked him whom we must respect of all people in the world, before the father. Islam decrees that a women can object to marrying a man she does not want to marry, at a time when forced marriages were in most if not every culture in the world. In fact, in Islam, it is the bride’s custodian (father or brother), with her permission, who proposes to the groom during a marriage. The prophet himself treated his wives with respect, never did he mistreat them nor injure them. The prophet did the household chores, played with them, fed them, treat them with love and compassion at all times. The shariah law rules that if we injure our wives (no, we are not allowed to beat our wives in that manner unlike what you’ve heard) or even to go as close as to destroying their belongings, she has every right to ask for a divorce in court.

Visit a mosque, ask a Muslim.