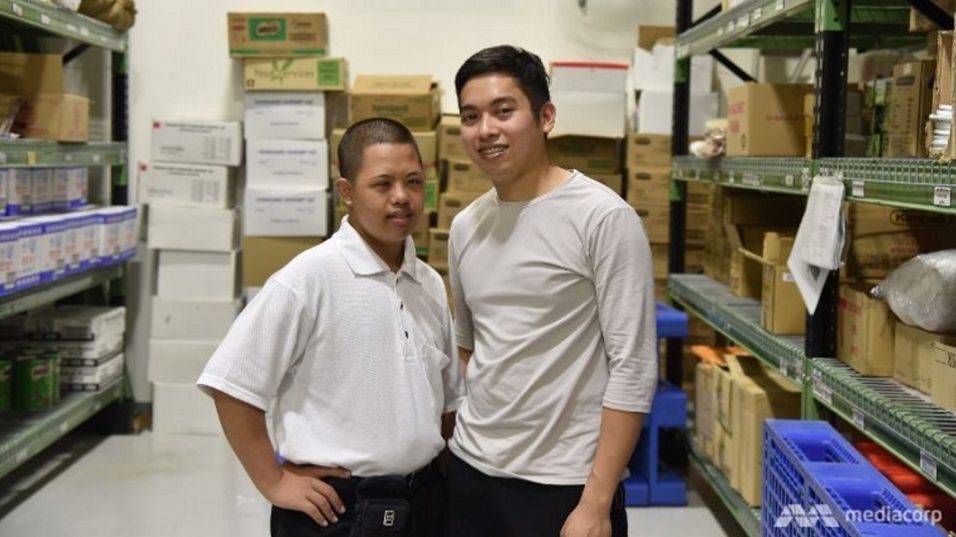 “Faiz, can you pack all these things into a box and seal it?” asked Mark Maranan, lead cook at the central kitchen of restaurant chain Han’s central kitchen.

The task may seem easy to most people, but for Faiz, who has a moderate to severe intellectual disability, it can be quite daunting.

Faiz has been working at Han’s central kitchen for almost two years. In his final year at the Movement for the Intellectually Disabled of Singapore (Minds) in 2014, Faiz joined the School-to-Work (S2W) Transition Programme which prepares students with special needs to enter the workforce.

Under the programme, Faiz was trained for about two months by SG Enable – an agency that helps people with disabilities – before he was deployed to Han’s for a nine-month internship.

After the internship, he was offered a part-time position as a packer at the food and beverage chain. To help Faiz assimilate into the work environment, his supervisor Mr Maranan informed the team about his condition and they accommodated his working style.

“He’s a quiet person so we need to adjust the way we communicate with him. We need to talk to him a bit slowly and we need to say it in short sentences so he can easily understand what we want him to do,” said Mr Maranan, who also described Faiz as a hardworking person who would often ask questions about his job.

“Faiz can communicate quite well. Sometimes we also have lunch together. He’s like an ordinary person to me,” he said.

Faiz’s job scope has also been expanded: He now helps out at the central kitchen, counting and marinating raw pieces of fish or chicken as part of the food preparation process.

“I like my job. Free lunch, earn money. They (colleagues) are very fun,” Faiz said with a wide grin on his face. Faiz’ job scope has been expanded and he is now helping out with the food preparation process. (Photo: Lim Jia Qi)

Others have not been as fortunate as Faiz. For Grace Cho, who has autism spectrum disorder (ASD) – a condition which hinders communication and interaction with people – there were difficulties in getting along with her co-workers.

The challenge for the 28-year-old was not about finding for a job, but keeping one.

After graduating from Mountbatten Vocational School in 2007, Grace took on several jobs before she was referred by an organisation that provides employment services for people with disabilities to work as a vegetable packer at a logistics company.

Getting along with her co-workers at the company was not easy as she would often be scolded for not being fast enough on her job.

“There were a lot of vegetables coming in and they (co-workers) started to rush for that. When it got jammed up, the vegetables dropped onto the floor … I was focusing on packing and sealing and I didn’t pick them up. Some of them said to me ‘You didn’t stop and help us pick up, you are not very good’,” Grace recounted.

“I felt angry. I pushed the boxes and they dropped onto the floor. But they (co-workers) kept repeating that they had enough,” she said.

Grace eventually left the job after less than a year. Her next job as a packer at a pharmaceutical company did not go well either as she was not clear about the workflow. “I got more things to pack. I don’t have a schedule and I didn’t know which one to do. I got confused,” she said.

With her mother’s encouragement, Grace sought help from the Autism Resource Centre’s Employability and Employment Centre and she is currently working as a packer at The Green Corridor, where fresh fruits are processed and packaged for the supermarkets in Singapore. According to the Ministry of Education (MOE), about 300 students graduate from Special Education (SPED) schools each year. About 1 in 3 from each cohort went on to work in different industries including retail, hospitality, medical services as well as food and beverage.

To help Singaporeans with special needs find employment, MOE has put in place various measures to prepare students in SPED schools for employment.

These include having a framework for vocational education that guides SPED schools to develop a structured curriculum to help students with special needs gain employable skills.

Students who obtained either the ITE Skills Certification at Metta School or Workforce Skills Qualification at Delta Senior School may apply for jobs in the open market or attend further training if they meet the pre-requisites for the courses, said MOE.

President of the Autism Resource Centre Denise Phua said one of the reasons that adults with autism are not able to hold down a job for long could be because many of them were never exposed to the culture of work and what is expected on the job.

“It is only in recent years that the quality of early intervention and education of students with autism is raised,” said Ms Phua, who is also a Member of Parliament.

Another reason could also be due to low awareness among employers to put in place autism-friendly worksites, she added.

While Ms Phua noted that employers have greater awareness than before and the emergence of more dedicated agencies to support people with special needs, more can be done to improve the current situation.

“It’s about showing models, systems, possibilities and success that employment and work can be done for people with ASD,” she said.

“It’s also about educating people and employers that there are different models of employment. For example, part time is one of the viable ways for people with special needs to be employed.”

For Grace, she has been working at The Green Corridor for more than a year. Besides having a job coach onsite to guide her, there are also visual instructions and communication scripts to help her work independently. Grace working with her job coach at The Green Corridor located at the Enabling Village. (Photo: Lim Jia Qi)

“The task that I was given I did it independently. I’m also following given schedule without someone telling me what to do next. I’m happy,” she said.