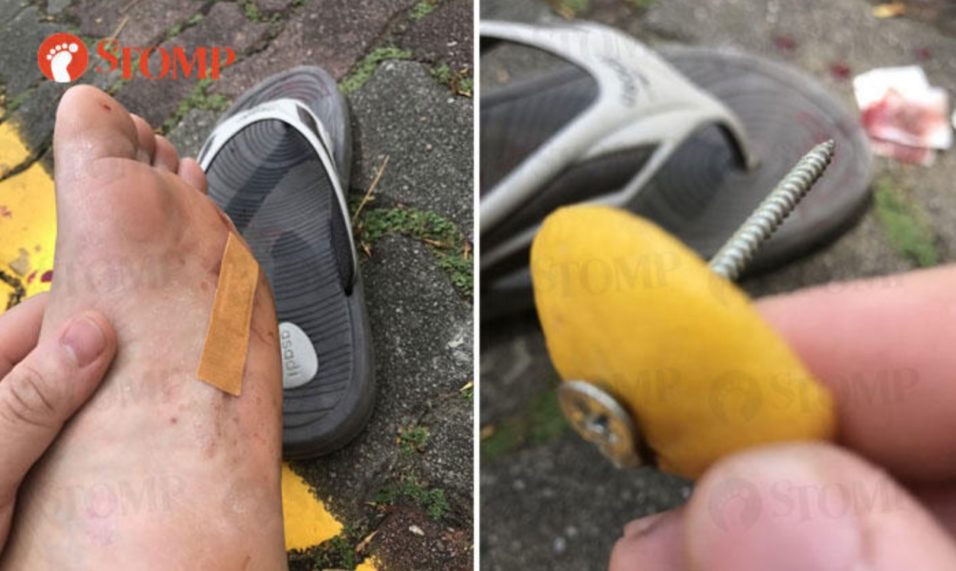 Stomper Nick‘s foot was pierced by a screw that had been inserted into a lemon peel and placed at a service road in front of Block 113 Toa Payoh Lorong 1 at around 1pm yesterday (Jul 31).

In a telephone interview, he said that he then saw around 10 similar objects scattered around when he surveyed the area.

Nick told Stomp that he was walking his dogs in the HDB estate when he felt that he stepped on something sharp.

Upon investigation, he found that a 5cm screw had went through his sandal and pierced his left foot. He was bleeding following what happened.

“Upon closer inspection, we found that the screw was deliberately inserted into a lemon peel and there were more scattered nearby on the road and some in the grass.

“Altogether we found about 10 of them.

“These have obviously been placed in such a way to puncture car tyres, but it is also extremely dangerous as people can step on them!

“There are a lot of families in the area and lots of children walk by as well.

“There is a playground just 10 metres or so away for crying out loud!

“Just to let everyone know that there are all kinds of sick people in this world, so take care of yourself and your kids and watch where you step.

“I’m in considerable pain, but otherwise fine for now.”

“I encourage anyone who lives or is in the area to be vigilant and make a police report if you see anything similar.”

The Stomper has seen a doctor to treat his wounds. He has received a Tetanus shot, some antibiotics and pain killers.

Nick has also lodged a police report over what happened.