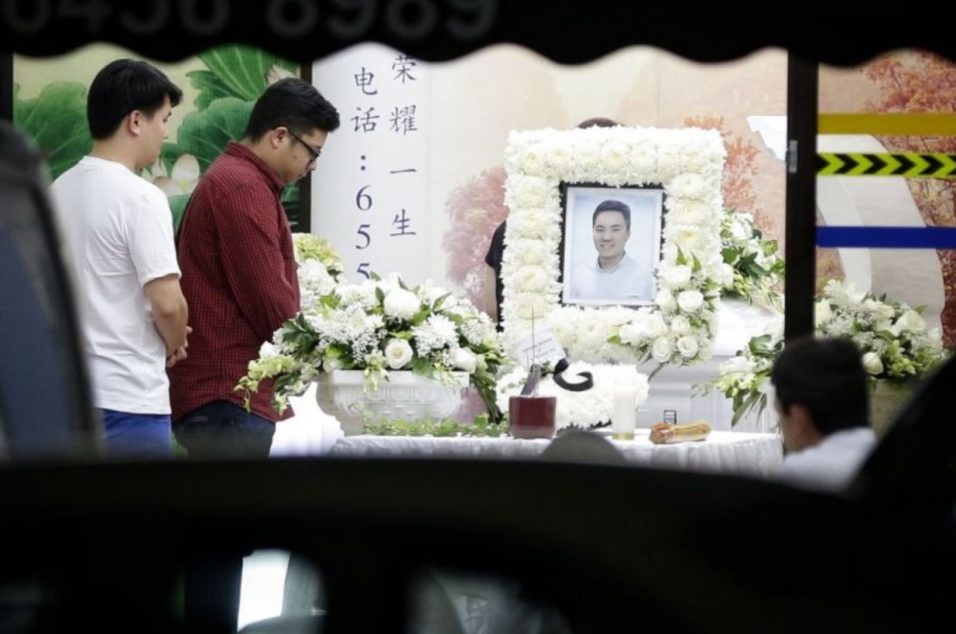 A 29-year-old man died after his car crashed into a Formula One barrier along Raffles Boulevard near Marina Square yesterday morning.

Mr Ng Phing Keen, who owns a car accessories business and had been set to be part of F1’s hospitality team, was believed to have lost control of his Honda Civic, which skidded and crashed into the concrete barrier.

He was taken to hospital but later died from his injuries.

Photos of the incident which happened around 2.50am showed the white car lodged in the barrier with its front badly damaged. Singapore Civil Defence Force officers found Mr Ng trapped in his vehicle and used hydraulic tools to extricate him.

His long-time friend, events organiser Charleston Li, said he first heard of Mr Ng’s death yesterday morning but thought it was a joke.

“I even scolded (the friend) for saying such things. But when I tried calling Keen (Mr Ng), his phone was turned off and I knew something must be wrong because he seldom had it off,” said the 31-year-old.

Mr Li, who has known Mr Ng for nearly 10 years, added: “He was somewhat of a best friend and brother to me. He has helped me a lot with my business and it’s really painful to lose him.”

Yesterday, several friends posted online tributes to Mr Ng, with many expressing shock at news of his death and sharing fond memories of him.

Mr Ng was a car enthusiast who had, according to his Facebook page, raced for the first time on a track in Melaka late last month.

Speaking to The Straits Times at his wake last night, Mr Ng’s younger brother, who declined to be named, said his brother was a joyful and happy-go-lucky person.

He declined to say more, but had earlier told Shin Min Daily News that it was not clear what the cause of death was. Mr Ng was believed to have suffered a heart attack but it is not known if it happened before or after the accident.

Singapore GP, which organises the F1 race here, offered its condolences and said Mr Ng had been scheduled to work at the grand prix for two weeks as a contract facility director next month and had been a valued member of the hospitality team for the past three races.

Mr Ng was not on duty with Singapore GP at the time of the crash, it added. The incident is believed to be the first time that a member of the public had crashed into a Singapore Formula One Grand Prix barrier since the first race in 2008. The latest barriers are in place for the event next month.

Speaking in general about such accidents, safety driving expert Gerald Pereira said normal cars, unlike F1 race cars, are not made to withstand great impact.

The Singapore Safety Driving Centre training manager also said: “Such accidents can be avoided if drivers are more aware of the barriers around them, and, more importantly, they should not speed.

“So slow down and even if you crash, perhaps the impact won’t be so great.”