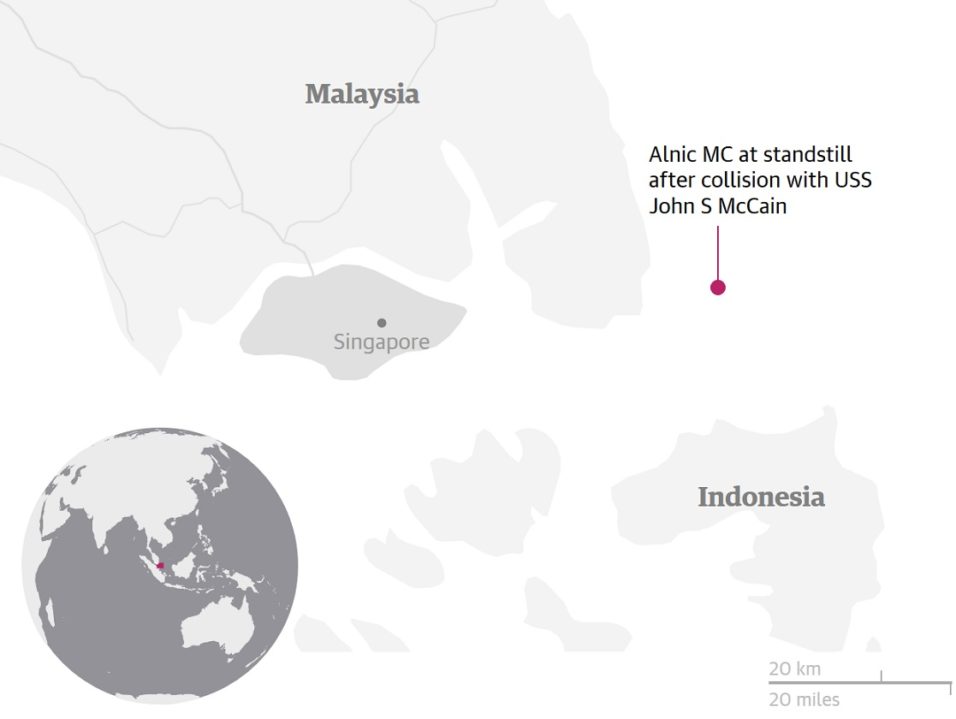 Ten American sailors are missing and five injured after the guided-missile destroyer USS John S McCain was damaged in a collision with an oil tanker off the coast of Singapore.

The US navy said the warship had “sustained damage to her port side aft” in the collision with the Alnic MC east of the straits of Malacca and Singapore.

It is the second collision involving a ship from the navy’s 7th Fleet in the Pacific in two months. Seven sailors died in June when the USS Fitzgerald and a container ship hit each other in waters off Japan.

“There are currently 10 sailors missing and five injured,” the navy said in a statement posted on the website of the commander of the US Pacific fleet.

“Search and rescue efforts” were underway in coordination with local authorities after the incident at 5.24am local time on Monday.

“In addition to tug boats out of Singapore, the republic of Singapore navy ship RSS Gallant, RSN helicopters and police coast guard vessel Basking Shark are currently in the area to render assistance,” it said.

The US warship was “currently sailing under its own power” to Singapore, the navy statement said, where it had been due for a routine port visit.

The statement gave no other details about the missing crew. The incident would be investigated, it said.

The Fitzgerald’s captain was relieved of his command and other sailors were being punished after the navy found poor seamanship and flaws in keeping watch contributed to the collision, it was announced last week. An investigation into how and why the Fitzgerald collided with the other ship was not finished, but enough details were known to take those actions, the Navy said.

The John S McCain, which has seen service in the 2003 Iraq war, the Korean peninsula and Japan, is named after the father and grandfather of Arizona senator and former naval pilot John McCain, who were both US navy admirals. Senator McCain tweeted that he was praying for the crew.

President Donald Trump replied “that’s too bad” in response to shouted questions about the McCain from reporters as he returned to the White House after a working holiday at his golf resort in New Jersey, according to pool reports.

The Fitzgerald and John S McCain are both ballistic missile defence (BMD) capable ships and part of the same Japan-based destroyer squadron. The 7th fleet has six ships assigned to BMD patrols, with half of those out on patrol at any one time.

Asked whether the US Navy would need to bring forward other ships to maintain its strength amid rising tension with North Korea, a spokesman said it was “way too early to know”.

Ship tracking websites showed that the Alnic was currently east of Singapore. The ship’s data showed it was “ballasting”, meaning that it was not loaded full of oil for cargo.

The waterways around Singapore are some of the busiest and most important in the world, carrying around a quarter of the world’s trade in goods and oil.