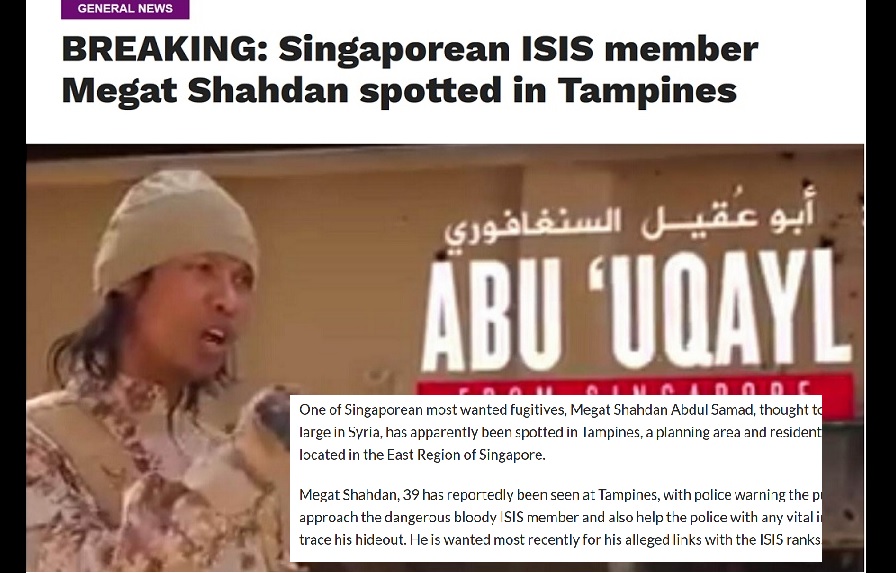 In the fake article from Houston News, it wrote about how one of Singaporean most wanted fugitives, Megat Shahdan Abdul Samad, thought to have been at large in Syria, has apparently been spotted in Tampines, a planning area and residential town located in the East Region of Singapore.

“Megat Shahdan, 39 has reportedly been seen at Tampines, with police warning the public not to approach the dangerous bloody ISIS member and also help the police with any vital information to trace his hideout. He is wanted most recently for his alleged links witht the ISIS ranks.”

“It’s the disguises, it’s his criminal entity network and it’s his ability to blend into the community,” the assistant commisioner said of the Megat Shahdan’s ability to avoid apprehension.

“He is a master of disguise so he may jave camouflaged himself in so many appearances.” Megat Shahdan is Singaporean “number one” fugitive, the senior officer added. “This man is dangerous… he has a significant criminal history.”

It was reported in the news a few days ago that Home Affairs Minister K. Shanmugam issued a statement confirming that Megat Shahdan is still believed to be in Syria, not in Tampines.

Megat Shahdan left Singapore in 2014 to work in the Middle East, where he is believed to have been radicalised, the ministry said in its statement.

“He subsequently made his way to Syria to join ISIS’ ranks. He is believed to still be with ISIS in Syria.”