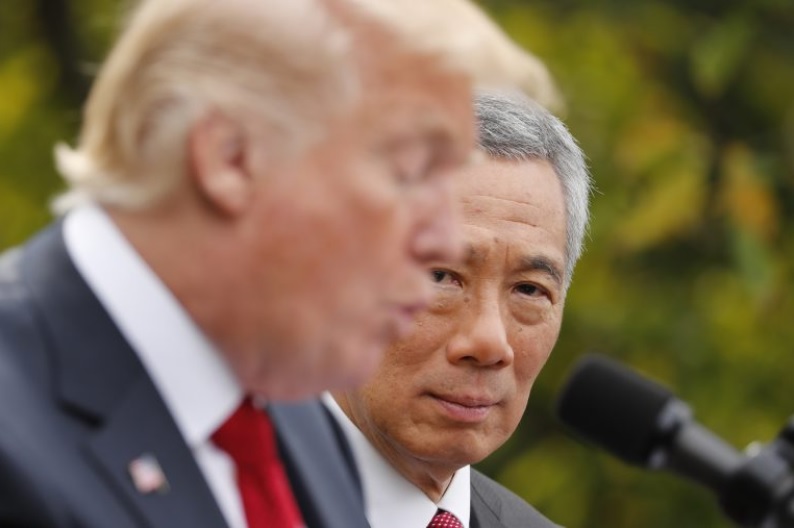 2017 was a horrible year for Singapore’s government — and for Prime Minister Lee Hsien Loong in particular.

It began with an open and vocal stoush with China. Late in 2016 the Chinese government confiscated millions of dollars’ worth of Singapore’s military hardware passing through the port of Hong Kong. The action was in part retaliation for Lee’s vocal endorsement of the US position on China’s militarisation of the South China Sea.

China released Singapore’s military hardware in late January, but then sent a new message of displeasure — Singapore was not welcome at Xi Jinping’s Belt and Road Forum in May 2017. While Lee did not attend the Forum, he later led high-level delegations to both Beijing and Washington, successfully recovering much lost ground.

Singapore’s ongoing balancing act between China and the US will continue in 2018 with a new factor in play — it is Singapore’s turn as Chair of ASEAN. This position puts Lee on the front line of regional attention. Awkwardly for this balancing act, Lee’s first statement as incoming Chair was a declaration of hope that the United States would continue its engagement with ASEAN and the region.

Recovering lost ground in foreign policy might be a modest achievement. But domestically, the government is in a state of perpetual crisis management interspersed with misguided political judgements.

The first domestic crisis of 2017 erupted in June when Lee’s brother and sister, Lee Hsien Yang and Lee Wei Ling, turned to foreign media and social media to reveal ongoing legal disputes over their father’s will. The dispute was not over money but rather over control of the family home. Prime Minister Lee wants to turn it into a national monument to his father, but his siblings want to follow their father’s wishes by bulldozing it.

This family argument over inheritance became a national issue when the siblings accused Lee Hsien Loong of abusing his power as prime minister to build a family cult around his father’s name — all to bolster his own standing and to smooth the eventual rise to the prime ministership of his son, Li Hongyi. This unresolved dispute has damaged both the Lee brand and Li Hongyi’s prospects of entering politics.

A second major crisis erupted in October when the regular pattern of train breakdowns on the Mass Rapid Transport system escalated into a major episode — a pumping station in a tunnel failed during an ordinary storm causing an entire train line to be closed by flooding for 20 hours. The cause of the problem proved to be mundane — maintenance work had been neglected and work sheets falsified.

The Minister for Transport Khaw Boon Wan magnified the damage by unilaterally exonerating both the government and the senior management of Singapore Mass Rapid Transit Corporation. He was particularly singled out for exonerating its CEO Desmond Kuek, whom he thanked as a ‘volunteer’ — a role for which he is paid S$1.87 million (US$1.39 million) per year. Khaw went on to praise him for having his ‘heart in the right place’.

This episode of ordinary mismanagement was politically significant because it highlights an established pattern of widespread administrative failures and deteriorating government services under Lee’s watch. It also confirmed the perception that highly paid ‘establishment’ figures are protected from the consequences of their actions. Back in 2008 Lee offered similar protection to former deputy prime minister and minister for home affairs Wong Kan Seng when he let an alleged terrorist escape police custody. Wong retained his positions in Cabinet for another three years because Lee stated he had only made ‘an honest mistake’.

The government has also made several political missteps in 2017. Such missteps included Lee’s odd selection of topics for his National Day Rally Speech in August — a speech equivalent to the US State of the Union address. With Singapore facing challenges on many fronts — managing Xi Jinping and Donald Trump, the South China Sea, rising protectionism, trains, the economy and challenges to Singapore’s role as an air hub — he lectured the population on the dangers of diabetes, which seems to have left most people nonplussed.

Singaporeans had also been anxiously awaiting new developments on Lee’s successor since he announced in 2016 that he intended to step down as prime minister in 2020. In a country where both the populace and the markets expect long lead times for prime ministerial succession planning — generally a warning of five years or more is given — concern is starting to grow that no clear successor has either been named or emerged.

Perhaps Lee’s greatest misstep was his handling of the presidential election. The government’s preferred candidate for president was almost defeated in the 2011 elections by popular Chinese rival Tan Cheng Bock. Tan was planning to run again and so the government excluded him by restricting eligibility for election to ethnic Malays under the rather thin cover of enhancing multiracialism.

This was effective in removing any challenge from Tan, but left just one candidate in the race after two of the three Malay candidates were excluded on other grounds. The episode left a widespread impression that the constitution and the electoral rules are just the plaything of the government, and has done significant damage to both the standing of the presidential office and the government.

While Singapore’s government has made some positive steps in terms of foreign policy in 2017, its handling of domestic issues has been sub-par. It was a particularly messy year for a government that claims to be preparing for a generational handover in 2020, and it does not bode well for the longevity of the Lee Kuan Yew model of governance.

Michael D Barr is an Associate Professor of International Relations in the College of Business, Government and Law, Flinders University.

This article is part of an EAF special feature series on 2017 in review and the year ahead.