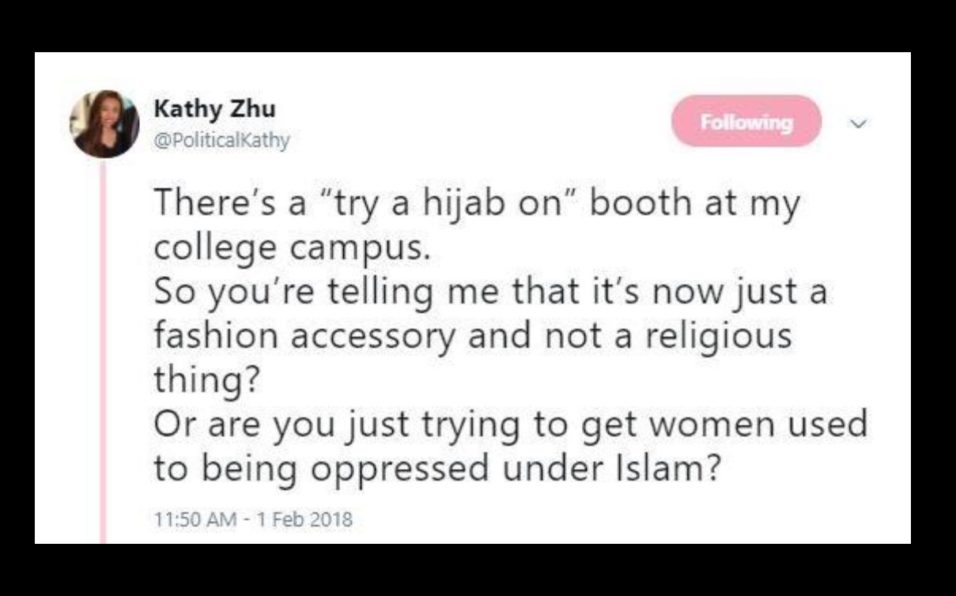 A University of Central Florida freshman drew national attention this week after she posted on Twitter about a Muslim group at her school offering students the opportunity to try on a hijab.

Kathy Zhu, 19, said she was walking between classes about noon Thursday, which was annual World Hijab Day, when she passed a Muslim Student Association tent near the Student Union.

She posted three photos and wrote “there’s a ‘try a hijab on’ booth at my college campus. So you’re telling me that it’s now just a fashion accessory and not a religious thing? Or are you just trying to get women used to being oppressed under Islam?”

Zhu’s post garnered a quick response, with thousands of Twitter users chiming in, including someone who said she was in one of the photos.

“I invited you to try one on and you said ‘no thank you,’” the woman wrote. “You didn’t take the time to even ask questions or try to understand what Hijab is. That’s ignorant of you. You literally sprinted after taking the photos. That’s pathetic.”

“Let’s get this girl expelled,” she wrote.

UCF issued a brief statement on Twitter about the matter Friday, saying no action would be taken.

“The University of Central Florida has received a number of emailed complaints suggesting that disciplinary action be taken against students involved in a disagreement being played out via social media,” the post on the official UCF Twitter account read. “Upon review, neither student’s actions as reported to the university violate our Rules of Conduct.”

Members of the Muslim Student Association did not respond to requests for comment Friday. The group posted photos on its Facebook page of several people, including at least one man, trying on the head coverings.

Thursday’s dust-up is one of several social media incidents at UCF during the past year. In July, a student said he was suspended from the school after he posted a marked-up note from his ex-girlfriend on Twitter. The school quickly rescinded his suspension.

And last March, a post on a private Facebook page inviting members to an event where they would learn how to find and report undocumented immigrants online received national attention. UCF officials said the event did not reflect the school’s values but would not trigger university discipline. The creator of the Facebook post later said the event was a hoax.

Zhu, who is studying political science at UCF, was born in China and grew up in Kissimmee. She said Friday in an interview that her messages weren’t directed toward a specific student. The woman in the photo calling for her to be expelled, she said, “was way more out of line than what I did.”

She said she took issue with the idea that students should try on hijabs at UCF, pointing to videos online of women removing or burning the head coverings in protest of a culture or religion they think is oppressive to women.

One of the photos Zhu posted to Twitter show signs under the Muslim group’s tent saying “My hijab empowers me,” and “My hijab is a symbol of understanding.”

“The hypocrisy of this is kind of disgusting,” she said.