Thai police said on Wednesday that a suspect captured by CCTV cameras minutes before a bomb exploded at Bangkok’s Erawan shrine was a foreigner, and his appearance suggested he might be from Europe or the Middle East.

At least 20 people were killed in Monday’s blast in the heart of the Thai capital. The government says the unprecedented attack on the city was designed to wreck the country’s economy, which depends heavily on tourism.

No one has claimed responsibility for the evening rush-hour bombing, in which 11 foreigners from several Asian countries died and more than 120 were wounded.

Prawut said in a televised interview that an arrest warrant had been issued for a “foreign man”, a sketch of whom showed a fair-skinned youth with thick, medium-length black hair, a wispy beard and black glasses.

“He had white skin and must have been a European or have mixed blood, perhaps with Middle Eastern blood,” Prawut said, without giving a reason for his assumptions other than the color of the man’s skin.

The sketch was based on footage that showed a man dressed in a yellow T-shirt dumping a backpack inside the shrine compound and walking away through a crowd of tourists about 20 minutes before the explosion.

Prawut earlier tweeted that police were offering a 1 million baht ($28,100) reward for information leading to the arrest of the suspect.

He said two other men, one dressed in red and another in white, were seen milling around the first suspect, apparently shielding him from the view of the crowd as he placed the rucksack in front of a railing.

Earlier, police had said they were sure some Thais were involved in the attack.

The shrine, a blood-spattered scene of charred motorbikes and debris after the blast, was reopened on Wednesday.

Police have not ruled out any group for the attack, including elements opposed to the military government, though they say it did not match the tactics of Muslim insurgents in the south or so-called ‘red shirt’ supporters of the previous administration.

Angel Rabasa, an expert on Islamist militancy at the RAND Corporation, said the attack could be the work of Islamic State, which has been expanding its reach in Southeast Asia, or an al Qaeda-related or independent jihadist group. However, such groups usually claim responsibility for their attacks.

Police said they were also considering the possibility that ethnic Uighurs were behind the bombing. Thailand forcibly returned 109 Uighurs to China last month.

Hundreds, possibly thousands, of members of the Turkic-speaking and largely Muslim minority have fled unrest in China’s western Xinjiang region, where hundreds of people have been killed, prompting a crackdown by Chinese authorities. Many Uighurs have traveled through Southeast Asia to Turkey.

However, Prime Minister Prayuth Chan-ocha sought to cool speculation of a revenge attack by Uighurs.

“I have always said that what the government did was within the boundaries of the law and by international agreement,” he told reporters. “If we did not send them they would have been a burden to Thailand. I don’t want this issue raised.”

Police chief Somyot Pumpanmuang said no direct connection had been established between Monday’s deadly blast and a small explosive thrown from a bridge toward a river pier in Bangkok on Tuesday. No one was hurt by that second bomb. A government spokesman had initially said there were “patterns” linking the two bombs which both used TNT.

The blast comes at a sensitive time for Thailand, which has been riven for a decade by a sometimes-violent struggle for power between political factions in Bangkok.

A parliament hand-picked by a junta that seized power in a 2014 coup is due to vote on a draft constitution next month. Critics say the draft is undemocratic and intended to help the army secure power and curb the influence of elected politicians. 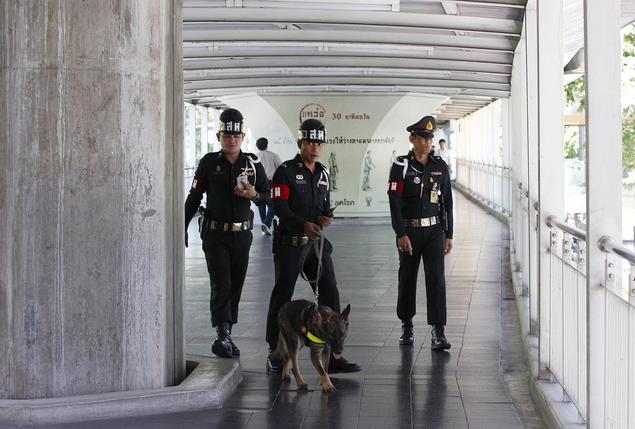