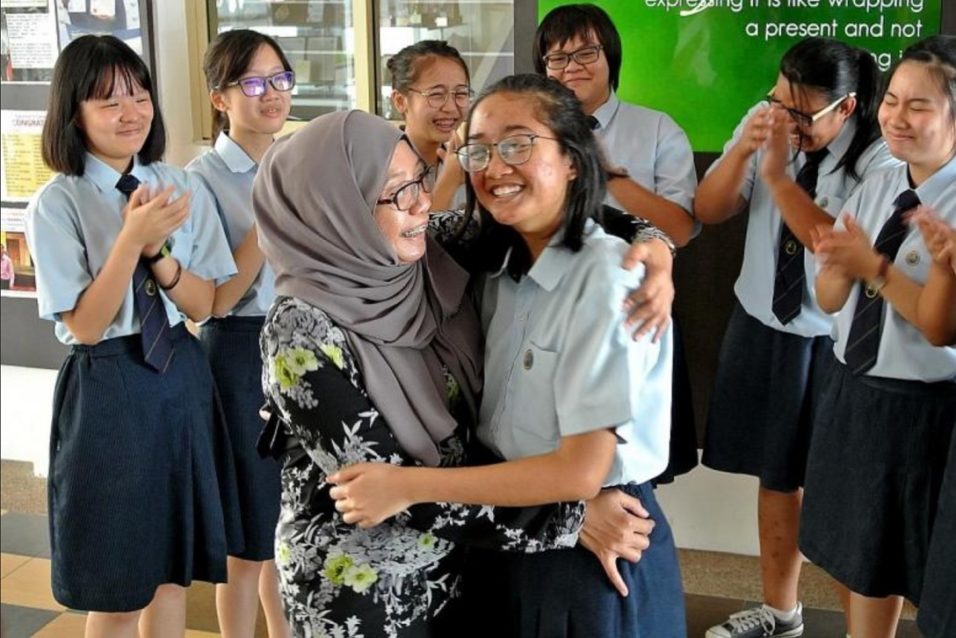 The secret to her success? She gave gave up her social media accounts and social life to concentrate on her studies.

Yesterday, that discipline paid off for 16-year-old Haziratul Zakirah – who was one of the top scorers from Hong Kah Secondary School with an L1R5 score of 13, which included three distinctions.

The class of 2016 set a record with yesterday’s results. Students who took the O levels last year outperformed their seniors with 84.3 per cent attaining at least five passes, surpassing the 83.8 per cent set by the 2015 cohort.

When Zakirah’s result was flashed on the screen in school, she started to cry.

She told The New Paper later: “I felt so relieved that all my hard work and sacrifices have paid off.”

She recounted how she had spent about four hours each day studying after returning home from school at around 6pm. On weekends, she would study for about nine hours on one day and spend the other day resting.

Zakirah, who has three siblings, said she was inspired by her mother, who is the sole breadwinner.

She said: “My mother works very hard so that my siblings and I can be successful in life. I don’t want to waste that effort.” Madam Siti Rodiyah, 48, a planning engineer, told TNP: “I wasn’t really surprised with Zakirah’s result because I had seen how hard she worked. But whatever her results, I am very proud.”

Zakirah scored eight for her L1R4, and based on last year’s criteria, she’s eligible for her dream course – biomedical science at Ngee Ann Polytechnic.

Zakirah, who grew up watching doctor shows on television, hopes to become one in the future.

She was also her school’s student council president and National Police Cadet Corps squad leader. She even found time to volunteer.

Zakirah said: “I have been through a lot of challenges, and I know what it feels like to need help. This made me want to help others so they have a reason to smile.”

Her mathematics teacher, Mr Dao Jun Sun, 35, said that he was not only proud of her grades but also her character.