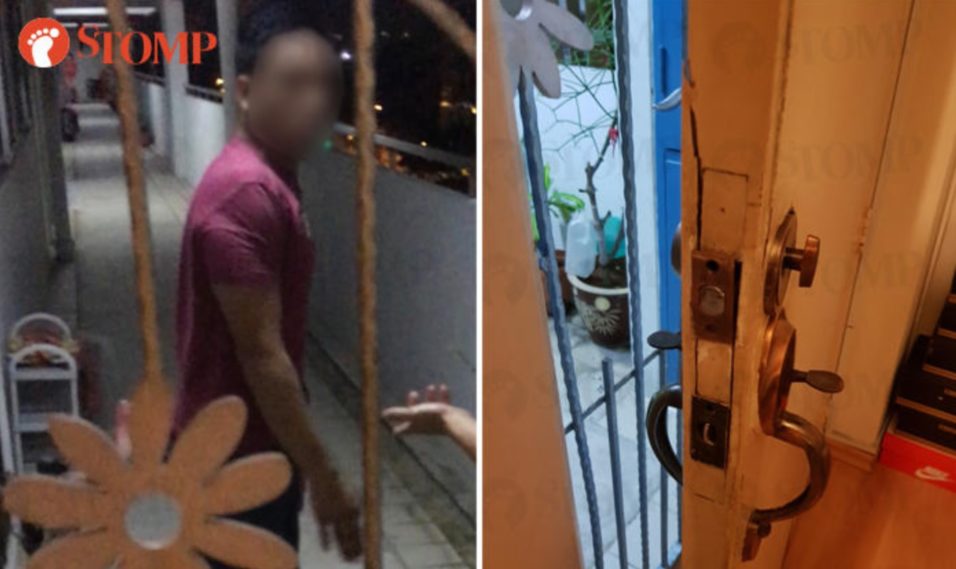 A male stranger allegedly tried to break into Stomper Ong‘s flat at Block 774 Woodlands Crescent at around midnight today (July 7), when only his wife and three-year-old daughter were at home.

The Stomper said he and his mother had been out at a funeral when the incident occurred at about 12.24am.

According to Amos, whose wife managed to take a picture of the man, he has never seen the guy around before.

The family subsequently lodged a police report but are still worried that the man might return.

“My wife and daughter were resting in our room. While my wife was in a phone call with her friend, both of them heard loud banging of the main door. She went out to open the door, thinking that it was my mum who was having difficulty opening it.

“To her shock, it was an unfamiliar man in a red shirt, trying to push his way through and enter our house. He stood in the front area of our house, asked my wife to keep quiet and intended to proceed further in.

“At that moment, my wife was only thinking about the safety of our three-year-old daughter. She shouted and asked my daughter to go into the room, then managed to push this red shirt man out the door and locked the metal gate.

“This man then stood outside and asked my wife for evidence that he did the damage to our door. After some confrontation, he walked away to the stairway and disappeared from sight.

“A neighbour came out after this (he hard heard loud banging noise, big thanks to him) and my wife managed to ask him to come over to help.

“While she was explaining the situation, this red shirt man returned and told my neighbor that my wife was ‘gila orang’ and ran off.

“That’s when she manage to took a short clip of his appearance. He was sweaty, bare-footed and kept scratching his leg using the other leg.”

Amos also shared a photo of the damaged inflicted on his door and said it was caused by the man “using a lot of force”.

“The police are currently investigating this, but what we don’t understand is his intention of doing this. Why did he come back? Why our house when there were people still in there?

“We understand that there is some neglect on my wife’s part (for opening the door without checking, and she can’t remember if she did lock the metal gate) but I believe he will eventually force his way in; it is just a matter of time.

“I can’t imagine what would have happened to the two girls if my wife had not overpowered him at that moment.”

In response to queries by Stomp, a Police spokesman said they were alerted to a case of House Trespass at Block 774 Woodlands Crescent at 12.28am.