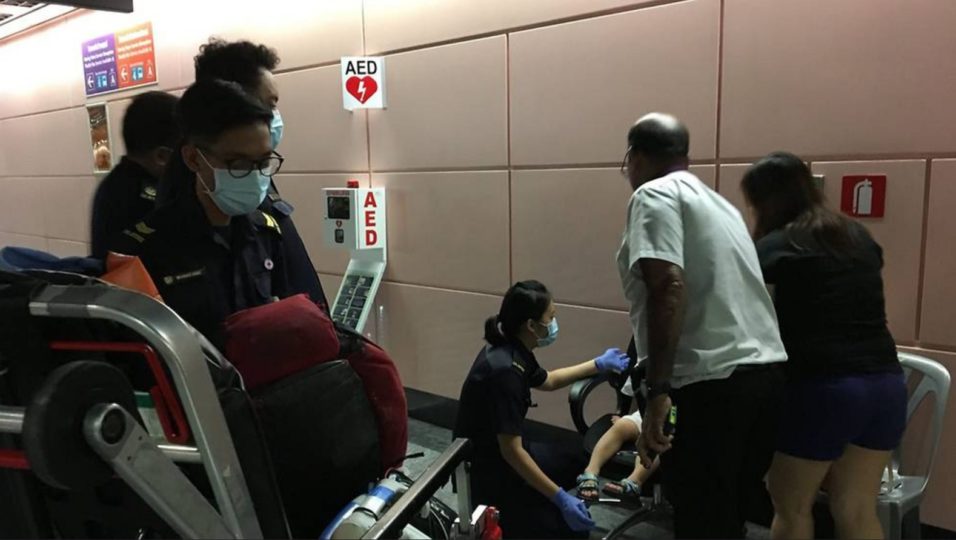 A toddler was hurt when the fare gates at Hougang Mass Rapid Transit (MRT) station closed on him unexpectedly on Sunday (Jul 16).

In a Facebook post that night, the child’s aunt, Ms Kelly Ng, said her three-year-old nephew had tapped his EZ-link card and was about to walk through the gates when they “closed up on him very fast”.

According to Ms Ng, the child’s mother informed two station staff but neither of them came out to assist her, she said.

“Out of exasperation and seeing there is no assistance going to be rendered, my sister opened the side gate to get to my nephew fast to check on his injury. He complained about pain on his chest and stomach, and perhaps on his shoulder too,” she wrote.

Ms Ng said the MRT staff called an ambulance and that when she arrived, the toddler was sitting on a chair “looking scared/shocked and in pain”.

“The main grouse from my sister is the two staff did not try to assist or come out from their seat to even take a look at my nephew who has been injured by the gates. They even tried to record my sister’s conversation with them. This kind of service standard is totally unacceptable,” the aunt added in the post.

In response to Channel NewsAsia’s queries, SBS Transit’s senior vice president of corporate communications Tammy Tan said the company was “sorry to hear” that Ms Ng’s nephew was hurt when passing through the fare gates.

Ms Tan said the team had spoken to the child’s father, Mr Lim, on Monday morning to find out how the child was.

SBS Transit has also investigated the incident with the help of CCTV footage. “From the footage, we note that the mother, who was pushing a stroller, had tapped in first followed by the child and then the father, Mr Lim,” Ms Tan said.

Ms Tan said that following the incident, Mrs Lim should have approached SBS Transit staff for assistance in getting her son through the fare gate instead of opening the side door manually for him.

She added that staff at the passenger service centre were not aware of the incident until the mother came forward to alert them about two minutes later, after she had attended to her son. An ambulance subsequently ferried the child to hospital where he received outpatient treatment, she said.

“Our staff should have come out from their office to see if the child was hurt and required medical attention,” Ms Tan acknowledged.

“We could have handled this better and do apologise for any distress caused. We will take the necessary actions to do better … We wish Mr Lim’s son a speedy recovery.”