Dollah Kassim’s Grave Among Those Slated For Exhumation

Rilek1Corner > Singapuraku > Dollah Kassim’s Grave Among Those Slated For Exhumation 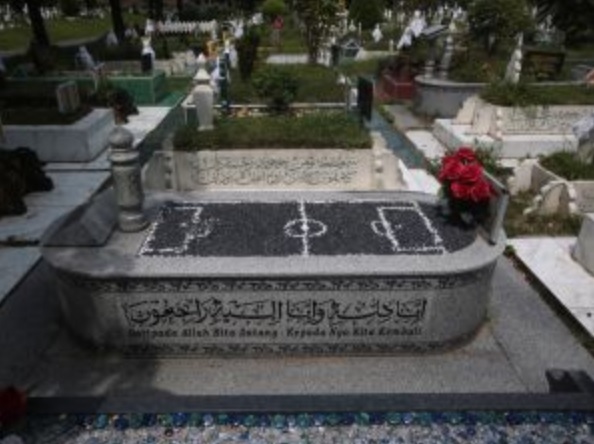 The graves of a local football icon and a former politician known for his anti-drug advocacy work are among those slated for exhumation at Choa Chu Kang cemetery to make way for the expansion of Tengah Air Base.

Abdullah Mohamed Kassim, who died in October 2010, rests in a tomb adorned with a bunch of red flowers and a miniature football pitch formed out of grey and white stones on top of the structure.

Better known as Dollah Kassim, he represented Singapore between 1968 and 1981, playing centre-forward, and was nicknamed “gelek king” for his graceful and deceptive dribbling.

Dollah, a respected legend in the region and one of the Republic’s star strikers in the 1970s, suffered a heart attack in October 2009, while playing in a veterans’ exhibition match. He died at 61, after spending a year in a coma.

Like Dollah, Harun A. Ghani, a former Member of Parliament and political secretary to the Home Affairs Ministry, was laid to rest at one of the 30,000 Muslim graves that will be exhumed at a later date, after they reach the 15-year burial limit.

Harun, who died aged 66 in August 2005, was known for leading the charge in the war against drugs in the Malay community.

He pioneered “meet-the-family” sessions, which have become a key component in rehabilitating former drug addicts and other ex-offenders.

He was often spotted at coffee shops counselling former abusers and their family members.

In 2005, an education fund dedicated to assisting families struggling with consequences of drug addiction was set up in Harun’s memory.

A total of 80,500 Chinese and Muslim graves, dated between 1955 and 2000, will be exhumed progressively to make way for the air base’s expansion. The first to go will be 5,000 Muslim graves across two blocks in the fourth quarter of next year.

TODAY understands that some families have already sought clarifications from the National Environment Agency and Islamic Religious Council of Singapore regarding the exhumation of their ancestors’ graves.

Heritage enthusiast Raymond Goh said many of the Republic’s founding fathers who died between 1946 and 1978 would have had their graves exhumed in earlier phases.

Mr Goh — who has embarked on an extensive documentation of graves at the Bukit Brown cemetery with his brother Charles — urged the authorities to work with the claimants to document the graves before they are exhumed.

“There is a lot you can uncover about the person’s genealogy and ancestry from the inscriptions on the graves,” said the 53-year-old pharmacist.

Prior to exhumation of graves at the Bukit Brown cemetery to make way for road developments, the Government worked with key stakeholders.

These included Singapore Hokkien Huay Kuan, The Peranakan Association of Singapore, Singapore Heritage Society, academics and grave experts, to document the graves, as well as memories and rituals associated with the cemetery.