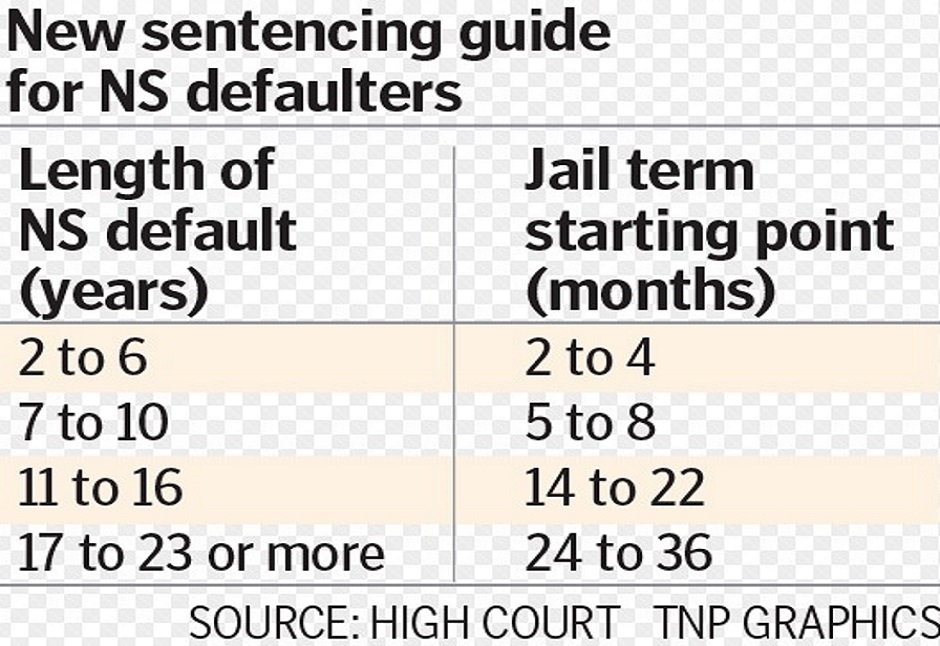 How well a national service (NS) defaulter performs in his duty when he eventually serves should have no bearing when deciding his punishment.

This was made clear yesterday by the High Court as it laid down fresh sentencing benchmarks for NS dodgers.

The benchmarks also “amplified” punishments for those who default for longer periods since it affects their fitness for service and the time they can serve as reservists.

The three-judge panel, led by Chief Justice Sundaresh Menon, set out four sentencing bands based on the length of default.

The grounds of decision were related to the cases of three defaulters, who were given heavier sentences in April after the prosecution appealed.

Explaining its decisions yesterday, the panel rejected key parts of the sentencing benchmarks laid out by Justice Chan Seng Onn in February last year, when he sentenced a 25-year-old to three months in jail for defaulting for more than six years, and then gave a 1½ month discount for his good performance in NS.

The panel agreed with Justice Chan that the main factor in determining an NS dodger’s culpability is the length of time he defaulted, and that anything over two years should mean a jail term. This, the court said, is because he would start serving only after his peers had completed their duty.

But, among other things, the court disagreed that the sentence should be calibrated based on whether the defaulter has a substantial connection to Singapore, that a discount should be given on the accused pleading guilty instead of claiming trial, and that exceptional NS performance should be a mitigating factor.