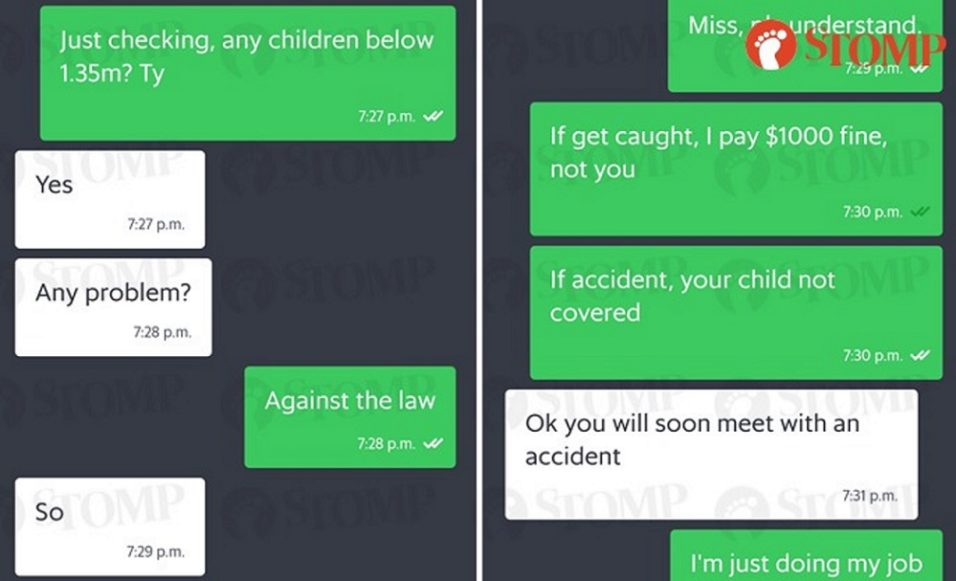 Stomper Tan, a part-time Grab driver, encountered a woman who had made a booking and then cursed him after he said he was unable to pick up children who did not meet the minimum height requirement.

Under the Road Traffic Act, it is illegal for private hire cars to carry passengers under 1.35 metres tall without a booster seat or a child restraint.

Offenders can face a composition fine of $120 and three demerit points. If charged in court, they are liable to a fine of up to $1,000 or a jail term of up to three months.

The passenger initially responded with “Any problem?” and “So?” when informed of this law. She later told Tan, “Ok you will soon meet with an accident” when he tried imploring for her to understand.

“I have been a part-time Grab driver for almost two years. I have had my fair share of unreasonable passengers and I would like to share my experience with one particular passenger.

“I am sure almost everyone is aware that private hire drivers are not allowed to pick up kids below a height of 1.35m. This is an ongoing issue being faced by both drivers and passengers alike and it is a huge inconvenience to both sides.

“So I got this particular job and somehow, my sixth sense told me to check for kids below 1.35m. My reason for checking was very simple. Regardless of whether the passenger knows or do not know the law, I do not want to waste both sides’ time.

“If they know and are just trying their luck, then they should jolly well cancel and not waste their time or mine.

“In fact, I am doing both sides a favour by checking instead of going all the way down to find out, then cancel which will waste both sides’ time and not to mention my petrol.

“So when I asked this passenger, all I got in return was a nonchalant attitude. I even got cursed by the passenger when all I was doing was MY JOB to inform her of the consequences.

“I mean, if she really loves her child, why would she risk it just to save a few bucks?”

Tan said he hopes that his experience will spread the awareness of this law.

He also advises parents with children below 1.35m to book the option of GrabFamily instead, where cars equipped with booster seats will arrive.

“Passengers who knowingly book other options just to save costs are just inconsiderate to both their own children and to the drivers,” he added.

“We private hire drivers are out on the roads just to make a decent living, spare a thought for us like we do for your children.”