Indonesia: Giant Statue Of Chinese God Covered Up With Sheet In Indonesia After Upsetting Local Muslims 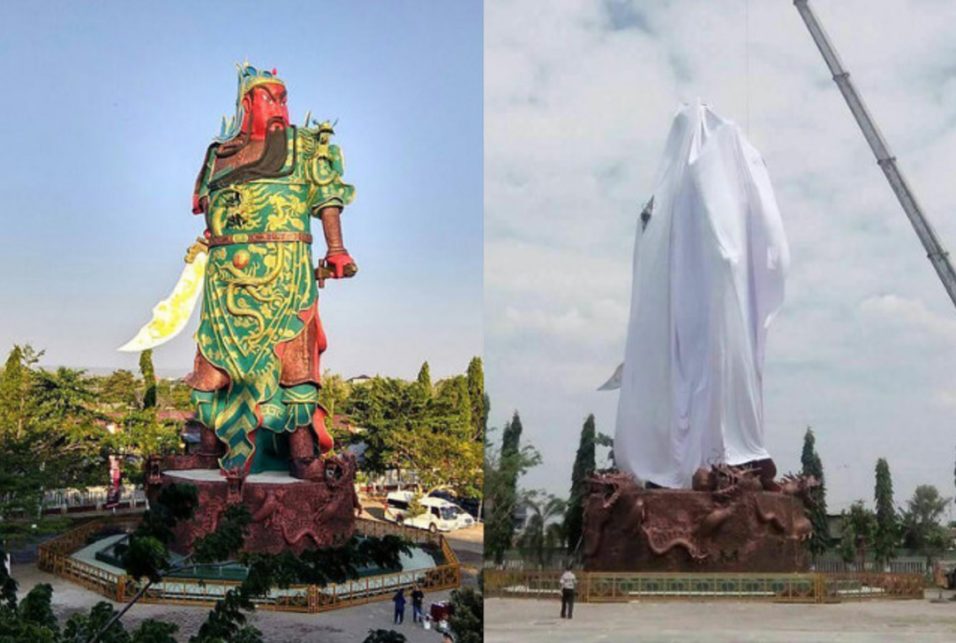 The giant god-turned-ghost is Guan Yu, a heroic Three Kingdoms era general who was later immortalized as a folk deity in China. The 30.4-meter-tall statue reportedly cost 2.5 billion Indonesian rupiahs ($187,000) to build and was funded by private donations to the Kwan Sing Bio Temple in Tuban, East Java.

It was publicly unveiled last month at a ceremony held inside the temple that was attended by prominent local politicians. Billed as the largest statue of Guan Yu in Southeast Asia, it was hoped that the colossus might help to attract more tourists to the city.

The decision to cover up the statue was made last weekend by the temple’s management following consultation with a governmental organization, the Forum of Religious Harmony, which is tasked with ensuring peace between different religious groups in the country, as a way of calming down the situation.

However, local Muslims have said that merely covering up Guan Yu is not good enough, vowing that if the government does not take action to tear down the statue, then they will do it themselves, holding rallies outside governmental buildings this week to urge local authorities to demolish the ancient warrior god.

Didik Muadi, the leader of the protests, told the local news site Tempo that the statue of the Chinese god should be torn down and replaced with one honoring Indonesia’s national heroes who helped fight for independence, though he is apparently fine with the temple erecting a statue to their god… just so long as it isn’t so big.

“Actually we can allow them to build the statue, just not as high as it was and it should be in the temple, not outside,” he said, adding that “We are tolerant.”

Sounds like Didik should really avoid ever paying a vist to the waterfront of Hubei’s Jingzhou city.