This Is What Happens If You Don’t Vote In Singapore; A $50 Fee If Reason Is Not Accepted

Rilek1Corner > Politik > This Is What Happens If You Don’t Vote In Singapore; A $50 Fee If Reason Is Not Accepted 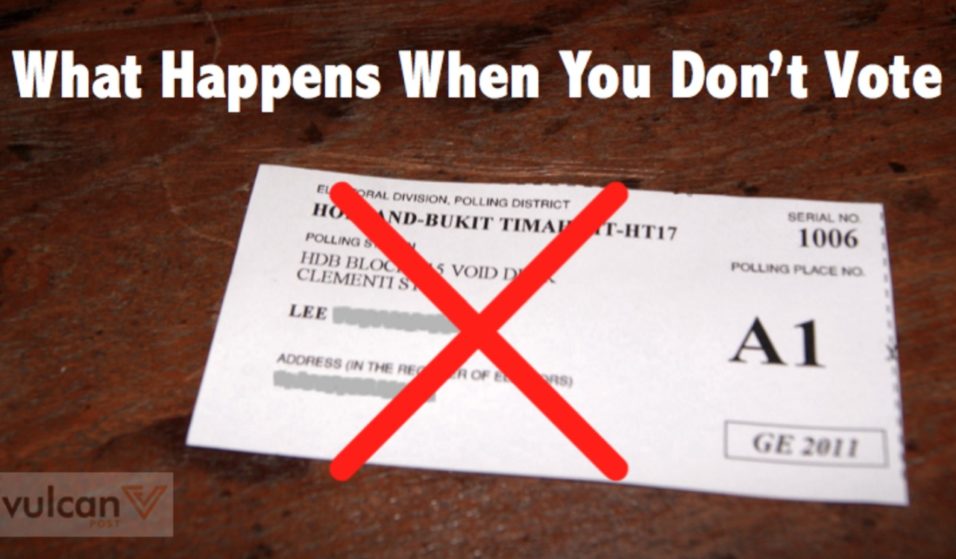 Voting: is it a right or a privilege? The verdict’s still out on that, but in Singapore, you’d better believe it when they say voting is compulsory.

According to the Elections Department website, “Voting at Singapore’s presidential elections or parliamentary elections is compulsory for all eligible citizens. It is part of the responsibilities of being an adult Singapore citizen.”

So what really happens if you don’t vote?

Well, you don’t serve time in prison, that’s for sure. But the Returning Officer (that’s Ng Wai Choong, who took over from everyone’s favourite Yam Ah Mee) will pass the list of names who didn’t vote to the Registration Officer, who will then remove your name from the list of eligible voters. This means you won’t be able to vote in future elections. It also means that you’re automatically disqualified from running as a candidate in any election.

You can get your name back on the list of eligible voters, though, if you explain why you didn’t vote here or send in a form providing your reason for not voting. Take note that you will only be able to restore your name to the list before the Writ of Elections is issued (it’s too late now), and that only certain reasons may be accepted, such as:

If your reason is deemed invalid, you will have to pay a S$50 fee in order to get your name restored (no, this is not an SG50 joke).

So to avoid having to go through the trouble of getting your name restored, cast your votes next Friday, and vote wisely, Singaporeans.