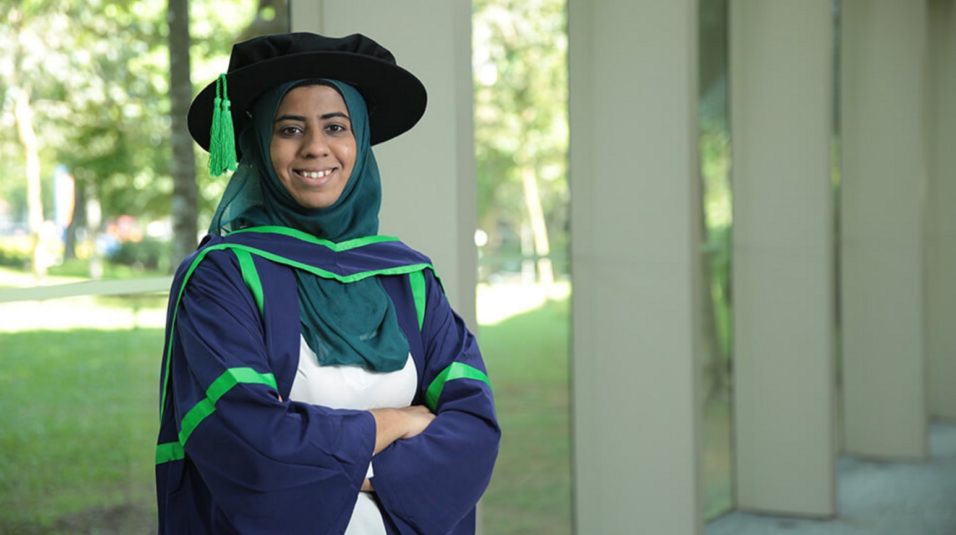 Valedictorian Nisha Mohd Rafiq, who will graduate with a PhD in Biological Sciences from NUS and King’s College London on 9 July, has been interested in science since she was young.

At fourteen years of age, the avid reader established a Science Club in her secondary school — Madrasah Wak Tanjong — so that she could gather like-minded individuals for discussions about science. Generous with her time and knowledge, Nisha conducted extra lessons and practical sessions in the laboratory for her peers in Secondary Four. Upon completion of her O Levels, Nisha studied biomedical science at Temasek Polytechnic and as part of her course, served as an intern with a research institute. The experience inculcated in her a deep passion for scientific research, so much so that as an undergraduate, the NUS Life Sciences major would seek every opportunity to work in the laboratories during school vacations.

Nisha is the inaugural PhD student for the four-year PhD programme jointly offered by NUS and King’s College London under the NUS Research Scholarship. As part of her graduate degree, Nisha conducted research on the mechanical signalling in podosomes. Podosomes, which are found in cells such as immune cells, break through barriers, allowing cells to move to a new location. The study of podosomes appealed to Nisha as cancer cells also had structures similar to podosomes, and she hoped that the study of the latter would provide some insight into the migration of cancer cells.

Speaking of what drives her, Nisha said, “In science research, more than 90 per cent of your experiments are likely to fail, but there is always this excitement and promise about uncovering something new or totally unexpected. And this really motivates me to pursue science.”

For her PhD degree, Nisha carried out research on mechanical signalling in podosomes

In June 2016, Nisha served as the co-chair of the Gordon Research Seminar meeting on “Signalling by Adhesion Receptors”. These two-day meetings, which take place before the Gordon Research Conference, provide post-doctoral fellows and students with the opportunity to meet with established professors in their respective fields. The week-long Conferences are intensive affairs, with sessions starting at 7.30am and ending around 11.00pm daily. Earlier this year, Nisha gave two talks on fibronectin, integrins and related molecules at a Gordon Research Conference held in California, US.

“In science research, more than 90 per cent of your experiments are likely to fail, but there is always this excitement and promise about uncovering something new or totally unexpected. And this really motivates me to pursue science.” — Nisha Mohd Rafiq

During her PhD candidature, Nisha also co-authored four research papers in peer-reviewed international journals, including Nature Communications and The Journal of Cell Biology. In spite of her busy schedule, Nisha makes time for the Women in Science Initiative at Mechanobiology Institute, Singapore (MBI) where she is currently a Research Associate. The Initiative seeks to encourage more girls to pursue science through interactive platforms such as talks and visits.

The two-time valedictorian — the first time being upon completion of her undergraduate degree — had this to share with aspiring researchers, “They should know that they will keep failing.” Nisha opines that success is achieved when a researcher, with minimal supervision, is able to shed light in a particular field.

Upon graduation, Nisha will continue working at MBI till the end of the year, after which she will seek a post-doctoral fellowship position in either Europe or the US. Her heart remains rooted to Singapore though, and she sees herself returning in the future to work on issues that the country faces, such as an ageing population.