Speaker Halimah Yacob To Run For The Presidency: Sources 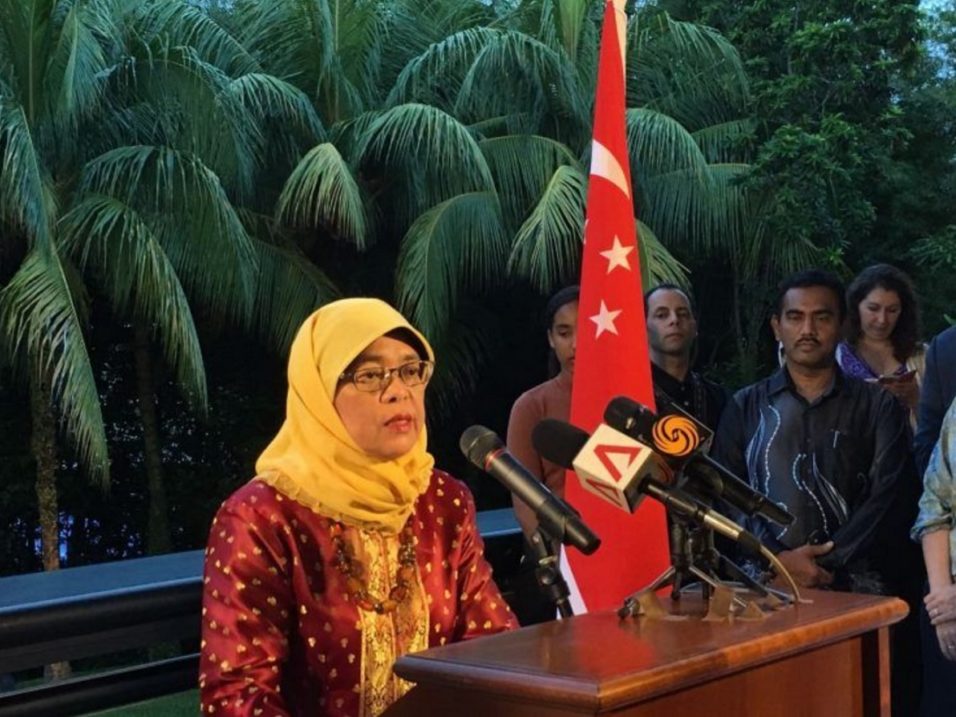 Speaker of Parliament Halimah Yacob has decided to run in this year’s presidential election (PE), according to a source close to the 62-year-old.

Halimah, who is also a Member of Parliament for Marsiling-Yew Tee GRC, has communicated her decision to run in the September election to grassroots leaders and People’s Action Party (PAP) activists, the source told Yahoo News Singapore on Thursday (27 July).

The former union leader said that she is sad to leave her constituency after having served there for the past two years, added the source.

When Yahoo News Singapore asked Halimah to comment on her bid for the presidency, she replied, “No. I am still considering.”

Earlier this month, Halimah told reporters that she is thinking about running for the presidency. “The elected presidency is a very heavy responsibility and an important institution in Singapore, so it’s not something that one should take lightly,” Halimah said then.

Signs of her impending run for the presidency have been growing for months. Another source in the PAP told Yahoo News Singapore that Halimah had indicated to party members as far back as March that she was planning to run for the country’s top office.

If Halimah were to be elected as president, Singapore’s already strong ties with the Muslim-majority countries in Southeast Asia would be further enhanced, said the second source. This year’s PE has been reserved for Malay candidates following amendments made to the Presidential Elections Act earlier this year.

Trained as a lawyer, Halimah began a long association with the labour movement in 1978 when she joined the National Trades Union Congress as a legal officer. She eventually rose to become Deputy Secretary-General of NTUC.

The mother of five entered politics in 2001 when she successfully ran as part of the PAP team that contested Jurong GRC. The team was re-elected twice before she crossed over to Marsiling-Yew Tee GRC for the 2015 General Election, following the redrawing of electoral boundaries.

In 2013, Halimah became Singapore’s first female Speaker of Parliament, replacing Michael Palmer after he was forced to step down over an extramarital affair.

Prior to Halimah’s announcement, two other potential candidates, Farid Khan and Salleh Marican, had also announced their intention to run for the presidency.

Farid, the chairman of Bourbon Offshore Asia Pacific, made the announcement at a press conference held at the Village Hotel Changi on 11 July.

Salleh, the Second Chance Properties founder and CEO, spoke to  Yahoo News Singapore in an exclusive interview about his candidacy and Halimah as a potentially strong opponent in the election.

Halimah has been stepping up her engagements with the unions, senior public servants and other groups in recent weeks, according to the posts on her public Facebook page.

Halimah has been meeting union leaders and workers from the steel, petroleum, HDB, chemicals and other industries. She met with the French ambassador to Singapore, Marc Abensour, on Monday. At a dialogue organised by the Institute of Policy Studies on 17 July, she had a discussion with 50 corporate associates about improving Singapore and the lives of Singaporeans.

In a Facebook post on her dialogue session with union leaders on Wednesday, she said, “We’re all fellow Singaporeans and regardless of race, we have stood together in solidarity for a common cause of securing a better life for our workers.

“During our dialogue, I am reminded that it’s been almost 40 years and we shared many experiences of heartaches and celebrations of our journey together. There will be more to come as we strive to build a stronger Singapore for the next generations.”