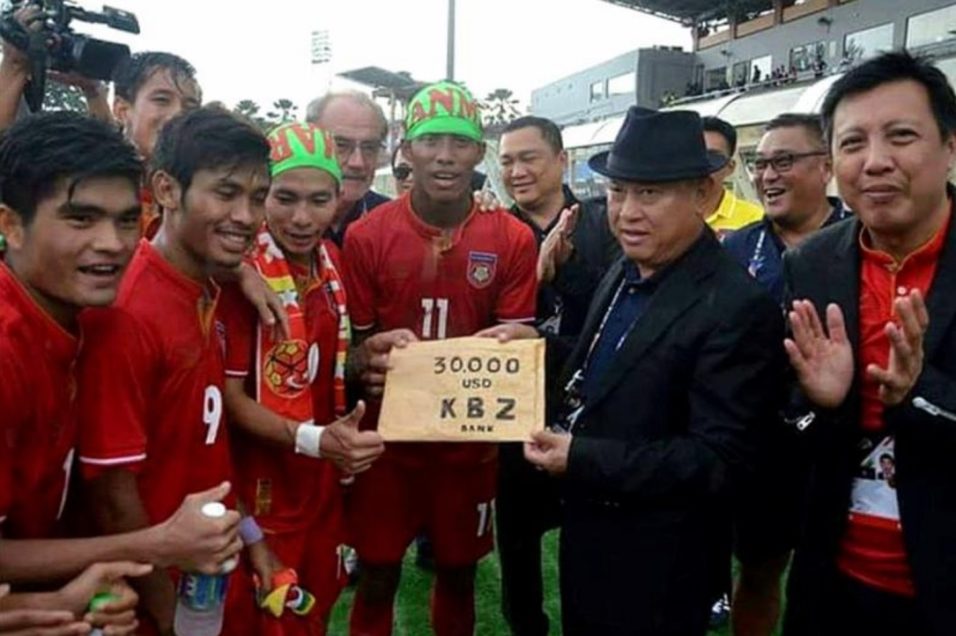 The Myanmar Under-22 football team have been rewarded handsomely for their 2-0 victory over Singapore on Monday.

Facebook page Thai Futbol carried a picture of the team being handed a brown envelope supposedly containing US$30,000.

According to sources, the US$30,000 came from KBZ Bank, while Myanmar Football Federation president U Zaw Zaw and former Yangon United chairman U Tay Za contributed US$10,000 each.

Former Singapore national coach P N Sivaji, who is now technical director of Myanmar National League side Hanthawaddy United, told The New Paper that such gestures are not uncommon.

He said: “There are quite a few patrons and well-wishers who have shown great willingness to support and reward the team.”

While Myanmar Under-22 coach Gerd Zeise has set an initial target of reaching the semi-finals, expectations are high as they have eight players who featured in the 2015 Under-20 World Cup and also won a silver medal at the last SEA Games.

They got off to a good start in Kuala Lumpur as Aung Thu’s goals either side of half-time were enough to seal three points in a group that also comprises hosts Malaysia, Laos and Brunei.

TNP understands that the Young Lions were offered $2,000 each to beat Myanmar on Monday, and that figure could increase for tonight’s do-or-die game against Malaysia in which they have to get at least a point to keep their semi-final hopes alive.

Elsewhere, the Sultan of Johor gave RM4million (S$1.27m) to the Football Association of Malaysia after their Under-22 side qualified for the AFC U-23 Championship for the first time last month.

The players were initially promised RM6,000 each for their efforts but can now look forward to a bigger payday.