Fair To Blame The MUSLIM Community For Subway Singapore’s Going ‘Halal = Not Tasty’? 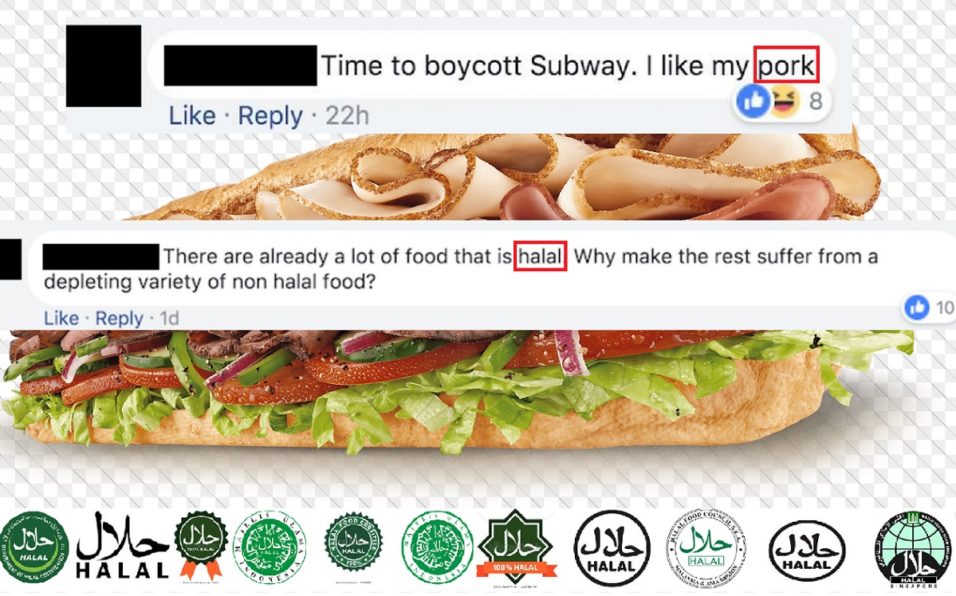 Why would Subway Singapore want to turn halal?

A few possible reasons. In recent years, there has been an increasing awareness of halal cuisine (New York’s famous Halal Guys food trucks for example), while Muslim tourism has seen a paradigm shift, with young Muslims worldwide driving a $300 billion boom. You can see that trend here as well, with the advent of popular halal food and travel blogs.

So it makes sense to jump on the bandwagon — provide Muslim-friendly services to get in on the big, formerly disregarded chunk of pie that is the Muslim market.

Or it could also be that Subway is losing customers with its mediocre sandwiches (we’ll get to that later) and wants to freshen things up a little.

So, why are folks angry?

The general (and admittedly completely subjective) perception here, is that once a non-halal food establishment turns into an official halal-certified one, the nosh just won’t taste as good as before. South Korean fried chicken joint Nene Chicken and Pastamania suffered that fate, with complaints about how their offerings seemed to have reduced in quality. There may actually be some truth to that, given that halal restaurants have to abide by a strict list of ingredients and suppliers put out by MUIS, and sometimes, the results just aren’t as satisfying as before.

Of course, there are rare cases like Maki-san and 4Fingers Crispy Chicken — both of which went halal and are still loved by all patrons from all backgrounds. It remains to be seen for Subway, though.

The most obvious change once Subway goes halal is that the chain will no longer have longtime favorites such as their BLT and Italian BMT. Perhaps they’ll still include those sandwiches, but with halal ingredients instead. But as all pork-loving eaters would proclaim — fuck turkey bacon.

‘Muslims are forcing non-practitioners to conform to their standards’

To be fair, religion is not to blame here — Muslims are not forcing Subway to get a halal certificate to accommodate them. Though the chain did entertain feedback from interested Muslim customers in 2010, it couldn’t find a way to do so back then.

There are actually already a couple of local halal options for lovers of subs, including Toasties, Watsub Sandwich Bar, and Yellow Submarine Cheesesteaks. They even have the option of hopping the border to Johor if they really want some Subway, where it’s already halal.

Subway Singapore clearly has reasons of their own to change up their business operations, but regulars are making the argument that the chain should have some outlets be halal-certified, while others stick to the status quo. But there’s the rub. Under the MUIS’ strict policy — if a franchise wants to officially go halal, all of their branches have to be halal, no exceptions.

Of course, others have argued that Subway should have gone the way of Fatboys and Astons, both of which launched separate halal iterations of their brand in the form of Fatpapas and Andes, respectively.

No doubt about it, Subway will lose a significant portion of customers if it does go halal. There’s a reason why some are calling for a boycott — they feel like they didn’t ask for this at all. Mostly because they didn’t.

On the flip side, what Subway loses in old regulars, they gain in new ones who didn’t have access to their subs here for the past 22 years. Furthermore, the chain still welcomes non-Muslim folks to patronage their outlets, the difference being that now they can dine in with the company of their Muslim friends, albeit without salami.

But is Subway actually good?

Ah, the obvious question. Why are people mad that Subway’s no longer selling non-halal food? Their sandwiches are mediocre at best, and no amount of MUIS-approved ingredients will fix shitty fast food. On the list of top sub sandwich restaurant chains in the Unites States, Subway doesn’t even crack the top 10. Hell, there are probably other sub sandwich makers here that do a far better job with halal subs.

But the Muslim population here isn’t going to care really — they’ll happily flock to whichever spot hangs up a halal certificate, no matter the food quality, and that’s just sad. Because of the strict adherence to that green MUIS sign, they’ve never tasted cuisine from the other side of the fence and will be happy with whatever’s served. They’re the type who’ll say that Le Steak and its overdone beef cuts are the best steaks ever, without knowing how good actual steaks are in actual steakhouses.

Then again, if Subway Singapore wants to be inclusive for the Muslim population, who’s to deny them that right? It might even be better than their old iteration. MIGHT.