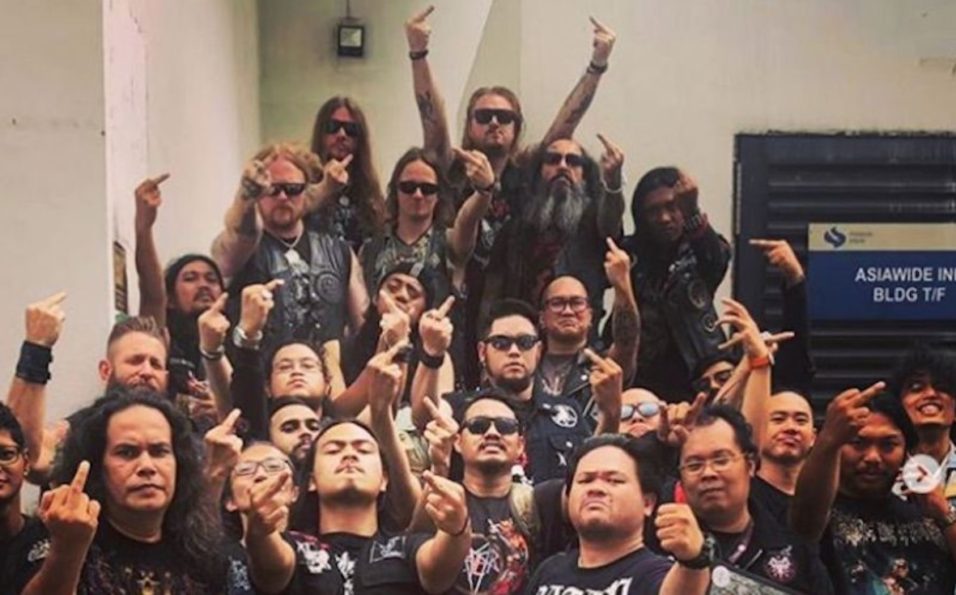 In the wake of the government’s order to block a black metal band from playing here (just hours before the concert was due to start), Minister of Home Affairs K Shanmugam oddly dragged in racial issues.

In a speech at an appreciation lunch for Malay-Muslim anti-drug campaigners on Saturday, the minister honed in on a photograph taken at a meet-and-greet session between Swedish band Watain and their fans. The picture depicted Watain and their fans showing ‘the middle finger’ — a defiant (and very metal) response to the government’s decision to cancel the concert on grounds of preserving “public order”.

According to Channel NewsAsia, Shanmugam detailed how the ministry would be unable to let the concert go ahead, given how Watain’s lyrical content held anti-Christian themes. Then he went into length about the photograph, harping on how it showed “primarily Malay young men”.

“You have a group of Malay young men, showing the one-finger sign, supporting the group,” CNA quoted the minister.

“If a group of Chinese went and showed the finger sign and said that we should allow it – how would you all have felt? It is the same.”

Mentioning that the photo has gone viral “across the Christian community”, Minister Shanmugam stated that it was crucial to show that the picture does not represent what the Muslim community thinks.

“They won’t realize that this a small group of Malays, but they may think, is this what Muslims think of us? So now we have to send the message that this is not what the Muslim community thinks. These are black metal group supporters, they are not the mainstream community.”

In conversations with Christian leaders, Shanmugam pointed out how the leaders would oftentimes draw comparisons to how tough the government would quash anti-Islam sentiment, such as banning the Salman Rushdie book The Satanic Verses in Singapore.

“(The leaders) said what these people (Watain) are saying is far worse, it is a hundred times worse about Christianity – how come you would allow that?” said Shanmugam to The Straits Times.

“They said you treat the Muslim community differently than the Christian community.”

Shanmugam acknowledged there was “some truth” to what the leaders said but said it was not fully true “but it is an approach”.

He also pointed out to Channel NewsAsia that not all bands would be banned because they spoke about Christianity.

What was the Minister thinking by saying all this?